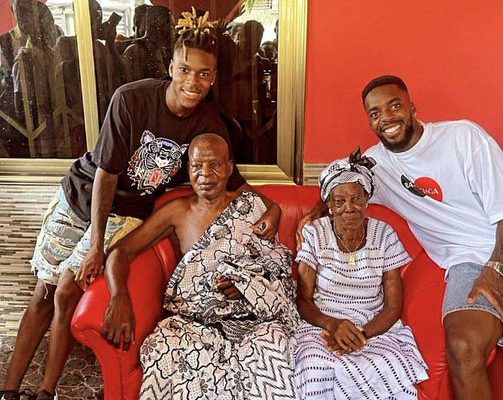 The Athletic player made his debut with Ghana. He tells in As how the decision process was in his family and the recent call of his brother Nico with La Roja.

Iñaki Williams made his Ghana debut against Brazil. He tells how the process was to make a decision that honors his origins, that places him in the World Cup and definitively puts aside the option of playing with Spain again.

He debuted with the Ghana shirt against Brazil, the result was not good, but the memory will remain.

I am very happy, content and proud to fulfill a dream, that of my whole family, especially that of my grandparents, who helped me make the decision I have made. I'm proud and looking forward to playing again and for the moment to score a goal to come.

How was that intimate moment afterward with your family?

Extremely emotional, because it was not an easy decision to make, but I do not regret it at all. It is a decision that will help me both personally and collectively and it is something very thoughtful and successful.

When did you really take the step?

The president contacted me and my family. There were several meetings where the idea of ​​him was transmitted to me. What they wanted and what they were looking for. They wanted me to contribute my grain of sand for the country. It was not easy to make the decision because at that moment the doors were open, who knows if at some point, to play with Spain. But everything changed when I went to Ghana and visited my grandparents. My 90-year-old grandfather told me that it would be a dream for him to see me for the Ghana national team. That cleared up any doubts. Fulfilling that for my grandfather decided it, I have made my whole family very happy and I represent what is in my blood.

Like you, Ghana has brought in new players. What is the OBJETIVE?

We have a very young team, but with a lot of quality. Most play in Europe. We can do great things in the World Cup. It is not an easy group, but there is a very powerful team. We can surprise anyone. We are not favorites and that is good for us.

They are paired with Portugal, Uruguay and South Korea.

Portugal is well known for the quality of its players and for its captain, who is a star. It will be a very difficult matchup, but we also have quality in midfield and we are very physical. It cannot be granted to Portugal, if you do not want to suffer, but it will be disputed. With Uruguay it will be even more physical, we are going to measure ourselves from you to you. Korea de Son is a team to be reckoned with. He is having a tremendous career in the Premier. It is an even and very open group.

What is your first memory of a World Cup?

A goal by Ronaldo in the final against Germany in 2002, with that peculiar haircut, shaved and with bangs. I have many others from Ghana, the one in the 2010 quarterfinals when Asamoah Gyan missed the penalty against Uruguay. I was very sad because I lived through that World Cup a lot, very involved with Ghana.

I saw him with his brother Nico. Did you think you could be there one day?

Being able to play a World Cup is within the reach of few. If the coach calls me, it will be a dream come true. I will give everything to put Ghana on top.

Del Bosque made him debut with Spain at the age of 21 in 2016, after that Julen Lopetegui, Hierro, Luis Enrique, Robert Moreno and, again, Luis Enrique passed. Did you ever think that he was going to enter?

I went with the Sub-21 and made my debut with the Absolute. I was in the pre-lists with Julen Lopetegui, but I didn't have the opportunity. Perhaps my performance was not optimal to be able to be there. That is already past water. The doors of Ghana were opened to me, to be able to represent the country of my parents, my origins. I couldn't let him get away. I could learn and enjoy. The train passed and I got on it. I hope to enjoy it.

He makes self-criticism with his performance sometimes so as not to be called, but other times people asked him and the selectors were asked about it. Did any coach talk to you? Have you felt undervalued?

In the end, I understand that each coach has to make his own decisions and there are many of us who can contribute to that list. There is a lot of competition and it is not easy for anyone. The coach made the decision that he believed and I accepted it with humility.

Did you consult with Athletic during this decision process?

The decision was more personal, but it is true that before making it I spoke with Athletic. In this case with Aitor Elizegi, the previous president. He was happy for me. The African Cups have been changed to January and I don't think it will affect when it comes to competing with my club. It is a decision in which the club also had to be part of it, because I owe it to them. It was consensual and I have felt their support and backing.