My GH₵60,000 worth banging body no longer for big men – Kisa Gbekle 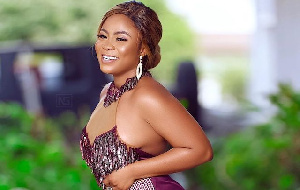 Ghanaian socialite, Kisa Gbekle, has withdrawn her earlier comments that her €8,000 liposuction body is only to attract rich men.

Shortly after Kisa’s surgery sometime in January 2022, she disclosed that she had invested so much in her body and for that matter, only rich men will be invited into her space in her bid to recoup her investment and make profits.

Kisa in an interview with Zionfelix at the time said she would need men with fat wallets to survive and take good care of her body.

“Now my body is meant for men with heavy pockets. When I say heavy, heavy entails a lot. You are aware that I have just completed my entire body. And it isn’t easy. It’s a large sum of money. So I need someone who is wealthy and has a lot of money. It doesn’t matter how old you are. I’m cool as long as the person is cool, calm, collected, and heavy,” Kisa remarked.

But it now appears the popular actress has thrown her hands in despair in her hunt for wealthy men.

In a recent interview with Abeiku Santana on the Atuu show, Kisa Gbekle said she no longer needs wealthy men. She asserted that she is not even interested in any relationship.

The actress said her earlier claims that her expensive body needs to be managed by rich men were borne out of naivety.

Kisa added that all she wants now is to stay away from controversies adding that her earlier comments about wanting rich men had a negative effect on her brand.