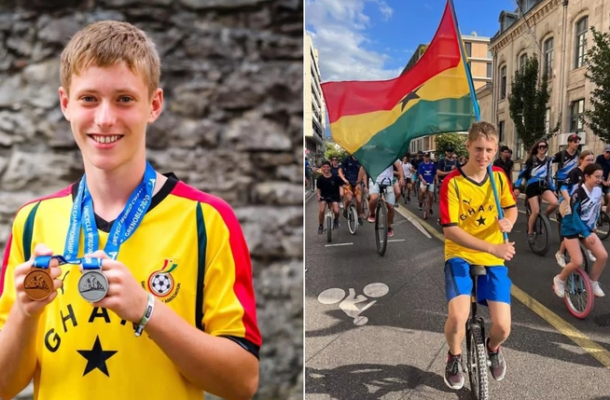 A young boy based in the North East Regional town of Nalerigu has made Ghana proud at the Unicycling World Championships.

The boy has been living in the North Eastern Regional town of Nalerigu for the past nine years with his father and represented Ghana at the Unicycling World Championships which is currently underway in Grenoble- France.

He won bronze and silver medals whiles representing Ghana at the World Championship.

Haun III came second in the 30m Wheel Walk Race for males between 15 and 16 years before adding the bronze medal in the 50m One-Wheel Race.

The athlete's father took to Twitter to announce his son's feat chalked for Ghana at the World Championship.

“This boy of mine took two Unicycling World Championship medals for Ghana - the nation’s first. I couldn’t be more proud of him for all his hard work and perseverance!” he tweeted, accompanied by videos of Roger’s exploits.

Unicycling is a sport practice that is not much known in Ghana, but includes more than 35 different disciplines such as collective, individual, artistic, or extreme sports.

This year’s Championship is currently ongoing in Grenoble, France, with thousands of athletes converging to participate.