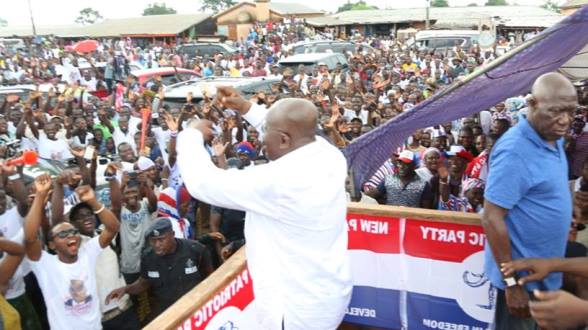 The New Patriotic Party (NPP) Presidential nominee for the 2016 election is convinced the electorate in the Northern Region will at the December 7 polls reject the Mahama led National Democratic Congress (NDC) administration.

Nana Akufo Addo who is on a four day campaign tour of the Northern Region is banking his hope on the overwhelming turnout at his campaign rallies up north. He is touring the Northern Region with a simple message of restoring hope in Ghanaians when elected President.

According to him, the nation is moving in a wrong direction under President John Mahama’s watch for which reason a positive change of government is necessary. “The years of stagnation and the years of deception under John Dramani Mahama are coming to an end for the years of progress and prosperity under Nana Akufo Addo.”

Addressing a mammoth night rally at the Tamale Zogbeli Park, Nana Addo Dankwa Akufo thanked the people of Tamale for their unflinching support.

He urged them to translate their support into votes on December 7 for a resounding victory.

He described as exceptional his triumphant entry into Tamale Township for his second day campaign tour of the Northern Region. He said the NPP has a competent leadership that is capable of making Ghana work again.

Nana Akufo vowed never to make promises he cannot fulfill and pledged saying, “If God willing I win the elections in December I will fulfill all the promises I am making.”

“Teacher trainee and nursing students’ allowances are going to be restored when Akufo is elected as President. My one district one factory and one village one dam policies are feasible.”

He bemoaned, “The NHIS has collapsed and I am going to revive it so that it can work again and I am fully committed to the free senior school policy.”

Nana Akufo Addo reechoed the need for the electorate to vote for all NPP Parliamentary candidates. He said the NPP has a proven track record of building Ghana to an appreciable level during the erstwhile Kufour administration.