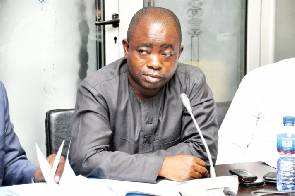 Deputy Water Resources, Works and Housing Minister, Sampson Ahi, has rubbished the New Patriotic Party (NPP) Flagbearer, Nana Akufo-Addo’s promise, to craft an 11th region out of the Western Region, should he emerge winner in the December polls.

“I take it to be a political gimmick, and Nana Akufo-Addo is going round, when he goes to hear that people need these particular amenities, he says when come I will do it for you. It is one of those things,” he said on Eyewitness News.

Speaking at Juaboso as part of his five-day visit of the region, Nana Addo explained that government will follow all the “constitutional provisions to get this new region” as he argued that such a move would facilitate development in the northern part of the region.

But Mr. Ahi, who’s the MP for Bodi in the Western Region, explained that Nana Addo was only pandering to people in the northern part of the region who had similar discussions.

“I am sure when he got to Sefwi, some people told him that what is needed by the people is the need to create a region so Nana Akufo-Addo took it. If he had thought of it before going to that part of the Western Region, he should have made the statement immediately he entered Sefwi,” he said.

Mr. Ahi further explained that meeting the constitutional requirements would not be as simple as Nana Addo had communicated.
 
He noted that, “Constitutionally, before you can create a region out of an existing region, you will need the support of all the eligible people registered to vote. When they vote, 50 percent have to vote and out of that 50 percent, 80 percent must vote yes.”

Mr. Ahi also indicated that, such a move would not garner the support of some key groups in the region.

“If you start by that premise that because the resources come from that part of the region and that is why you are going to create region for them, you will not get the support of the Nzemas, the Ahantas, the Wassa and so on.”

Buttressing his point that the promise was merely a political talk, he said the NPP had made similar promises to the people of the Volta Region and the Brong Ahafo Region, but failed to deliver on it in their eight years in office.

NDC gov’t is already working on creating that new region

After criticizing the promise however, Mr. Ahi also noted that it was not a new proposal, and that the people of the northern part of the Western Region, are already working on forwarding a proposal to central government for the creation of the new region.