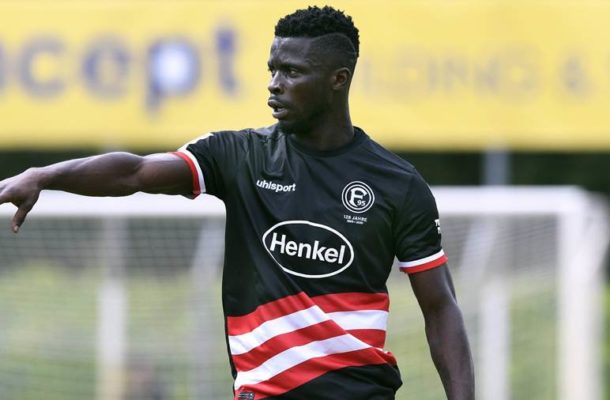 The Ghanaian played for Fortuna again for the first time in two years and, despite clear physical problems, was still one of the better players, but also missed a good scoring opportunity.

His side defeated lower tier side TuS Koblenz by a lone goal with the goal scored by veteran striker Rouwen Hennings.

The match played last Saturday, 2nd July,2022 was to celebrate the 111th anniversary of TuS Koblenz, the Fortunes didn't create enough chances and sometimes got into trouble with the Oberliga team's quick counterattacks.

Rouwen Hennings scored in the 28th minute from a direct free-kick that Nana Ampomah created.

Daniel Ginczek had the clearest chance on Fortuna's side to make the result clearer, who once aimed too high and hit the crossbar shortly before the end.

"After a long break, Nana Ampomah had some good scenes. Of course, we still have to wait and see for Ao Tanaka after two training sessions," said Thioune, who was happy that so many fans had come to Koblenz in the high temperatures.

After spending two seasons with Fortuna Dusseldorf, one in the Bundesliga and another in the Bundesliga two, Nana Ampomah made a return to Belgian club Royal Antwerp in October 2020 but struggled to replicate the success he had at Waasland Beveren at his new club the last two seasons.

He made 24 appearances for the Belgium club across all competitions last season.