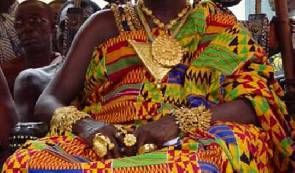 The Dunkwahene and his elders have penalized two foul-mouthed National Democratic Congress (NDC) firebrands in the Upper Denkyira East Constituency.

The two, Isaac Apaetia (secretary) and Tommy Dzokoto (Communication officer) were fined based on alleged cynical and disrespectful comments they made against the kingmakers and respected men of God after a non-denominational prayer festival held in the town.

The kingmakers are demanding 12 sheep, 12 bottles of Schnapps and an amount of GHC1, 200 from them.

They were alleged to have taken to a WhatsApp platform dubbed "Denkyiraman" branded the kingmakers and the clergy as corrupt and bias.

The Dunkwahene, Nana Obeng Nuako speaking on Adom News said it was rather unfortunate that there has been a calculated attempt to twist their non-denominational prayer festival intended to pray for the town.

He said chiefs and people of Dunkwa are aware of the constitutional limitation set on chiefs and would not allow them to draw them into what he described as their ‘dirty politics’.

Nana Obeng Nuako indicated that they have given them two weeks ultimatum to settle the fine or face the wrath of the gods and Nananom.