If NDC loves northerners, where is the SADA money - Bawumia asks 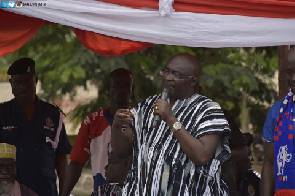 The running mate of the New Patriotic Party says the governing National Democratic Congress cannot claim to love northerners when it misappropriates funds meant to alleviate poverty in the north.

Dr Mahamudu Bawumia said a government that runs down the Savanna Accelerated Development Authority a policy initiative meant to arrest the poverty situation in the northern parts of Ghana; "steals" the money meant to execute the policy cannot profess to love people from northern descent.

He was reacting to accusations by some officials of the governing National Democratic Congress that the NPP does not respect people from the North.
With some 50 days to go for election 2016, the Northern region undoubtedly remains a key battle ground for the front runners in the election.

The General Secretary of the NDC, Johnson Asiedu Nketia while addressing party followers in Tempane in the Northern Region said it is only the NDC that does not discriminate against any Ghanaian.

He accused the NPP of discriminating against northerners and using Dr Mahamudu Bawumia, a northerner as a 'trojan horse' to cover up their discrimination.
But NPP and Dr Bawumia have responded, chronicling a tale of policies that have gone bad or riddled with corruption and misappropriation of funds.

The NPP running mate told supporters of the New Patriotic Party in Buipe in the Northern Region that the NDC cannot be trusted because its record in the north is nothing to write home about.

"If they loved northerners they wouldn't have chopped the SADA money. They say they love the northerners but they have not paid school feeding grants for two terms for schools in the northern region. Do they love us?" he asked again to which the crowd said No.