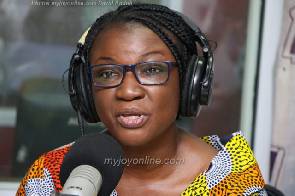 Dismissing suggestions that the policy document is not complete three months to the December general elections, she was emphatic that the manifesto has been “ready for a very, very long time”.

After cancelling a planned August 28 date to launch its manifesto, the governing NDC has released a new date for the launch which is September 17, 2016.

The opposition New Patriotic Party (NPP) which has also postponed the manifesto launch has been keen to fuel the view that it fears the NDC could clone its ideas or unfairly lampoon them if it goes ahead to launch its manifesto before the governing party does.

It is an explanation the NDC has predictably rejected.
Speaking on Joy FM's Super Morning Show Monday, the Deputy Transport Minister who is also the campaign spokesperson insisted that although the manifesto has been ready “sometimes even finding a suitable date is a challenge.”

She stressed the party’s position that the party calendar details that the manifesto would be launched after the campaign team has been put together followed by a campaign launch.

With these two items dispensed with, the manifesto is the next item. But with a Muslim holiday coming up on the 12 September, the party, she said, is left with no choice than to schedule the launch after the holiday.

She revealed even before the party launches the policy statement, some highlights will be released on 13 September, a day after the Muslim holiday.
Bawa-Mogtari believes the delay in releasing party manifestos will not deprive the public of an issue-based campaigns.

With general elections slated for December and still no manifesto from the two main political rivals, NDC and NPP, Mrs. Bawa explained that three months to the elections is “enough time to still debate the issues”.

To facilitate a wider reach of its manifesto, the campaign spokesperson revealed the NDC will translate its manifesto into different Ghanaian languages.

According to Bawa, the 2016 manifesto “will be a continuation of our existing manifesto”. But it will be updated with new ideas and programmes for a government seeking to continue with its mandate.

One thing she wants Ghanaians to expect from the 2016 manifesto is that it will be realistic and devoid of pie in the sky promises.