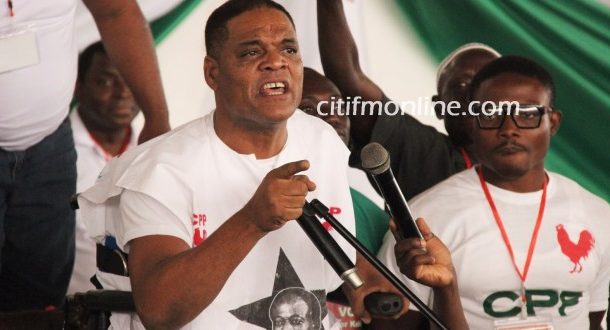 The Flagbearer of the Convention People’s Party (CPP), Ivor Kobina Greenstreet has accused the governing National Democratic Congress (NDC) and the opposition New Patriotic Party (NPP) of buying votes in the Central Region.

According to him, the two parties continue to deceive the electorate in the region to vote for them by distributing freebies including outboard motors and fishing nets two months ahead of the December election.

Addressing residents at a rally at Anomabo in the Central Region yesterday [Thursday], Mr Greenstreet said although the parties are aware of the developmental challenges of the people, they have failed to address them over the last two decades.

“For 24 years since 1992, have you seen any change here? and you are in a fishing community. How much does a cold store cost? It is not expensive. And every 4 years they come to you back-door with the money, outboard motors, T-shirts, fishing nets, the promises and lies,” he said.

He called on the people in the area to reject the NDC and the NPP and vote massively for the Convention People’s Party (CPP) to bring progress and development to the area.

He said the two parties did not have the concern of the people in the area at heart.

Mr Greenstreet is currently on a campaign tour of Central Region to canvas votes ahead of this year’s presidential and parliamentary elections in December.

He is in the company of the CPP’s National Chairman, Professor Edmund N. Delle, Vice Presidential nominee of the Party, Nana Gabby Nketia, the first Vice Chairman Hajia Hamdatu Ibrahim, and a host of other rank and file members of the Party.

The Electoral Commission (EC) last week accepted the nomination forms of the Convention People’s Party and cleared it to contest in the upcoming elections. 13 presidential candidates were disqualified by the EC after their nomination forms were found to have been improperly filled.