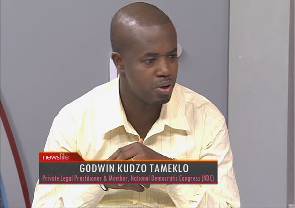 A deputy youth organizer with the governing NDC has said there is no need to dismiss a negative governance survey because it can be used to prove that government interventions are working.

Godwin Edudzi Tamakloe who is Greater Accra deputy Youth Organiser explained that the 2016 CDD survey, when compared to the 2014 version, shows the government is turning things around just in time for the 2016 general election in December.

Some government spokespersons have rejected the report and the NDC Deputy General Secretary Koku Anyhidohu has stressed an NDC position that the CDD is an appendage of the NPP.

But speaking on MultiTV/Joy FM news analysis programme, Newsfile, Godwin Tamakloe said “for me, I cannot approbate and reprobate this report."

Tamakloe who is also a legal practitioner referred to a 2014 report which showed that 82 percent thought the country was heading in the wrong direction.

It means there is a 12% drop in negative outlook about the government’s management of the country.

“The report today, as I see it, paints a better picture than 2014, obviously things can always be better tomorrow.” ” he said.

Explaining factors that might have influenced the results of the survey, he said some of the worst market fires in Ghana happened in 2013.

The losses affected families as market women lost millions. "Obviously, you should expect that this should have a certain outlook on how we perform economically and this reflected in the 2014,” report said.

But with the provision of social infrastructure like market, school, and hospitals it could be possible that these projects are influencing the improvement in negative perception in 2014.

He said just as the market fires affect the 2014 outlook, the height of the energy crisis in 2015 appears to have affected the 2016 performance.

The NDC Greater Accra Deputy Youth Organiser said in view of the CDD report, the pressing question for government should be; “How do I send a better signal of a better tomorrow to those who think the country is going in the wrong direction?”

He said government’s intervention in resolving the power crisis could ease Ghanaian apprehension about the country’s direction.

“You cannot tell me that the president’s intervention in resolving the energy problem is not yielding positives…if a few years ago due to the energy crisis people were unable to employ [staff]….the narrative will remain the same when the problem is resolved. Obviously no.”

The lawyer was optimistic that government can show the kind of signals that can correct the despondent perception.

He said just as people buy a used car not because they are fully certain of its quality but based on signs that it is in good condition, people may buy into a government based on signals of improvement.

Tamakloe also found satisfaction in the fact that the CDD survey also shows Ghanaians are optimistic things can improve in 2017.