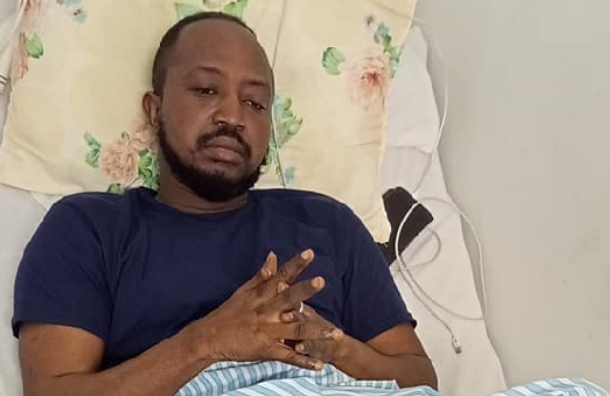 Former flagbearer hopeful of the opposition National Democratic Congress, Stephen Atubiga, has been hospitalized after suffering a knee injury in a car accident.

In a Facebook post shared on January 9, 2021, Atubiga, who has broken away from the NDC, asked his followers to pray for him.

"Guys, please pray for me; I was involved in an accident this evening. And got a knee injury. I am hoping to get back on my feet soon," he posted.

Two days after, the former NDC communicator shared a post indicating he had been scheduled to go through surgery while appreciating his friends and loved ones for supporting him in prayers.

"I sincerely appreciate all your love and prayers. I am also grateful to all those who have visited. It looks like the village boy is not going home anytime soon. Especially as I am being prepared for surgery. Please help me also thank the orthopaedic Doctors and all the nurses in the hospital. You never know the importance of your legs until you can't move with them," he wrote on January 11, 2021.

In his latest post made on Wednesday, January 12, 2021, the founder of the National Liberation Party attributed his predicament to 'political spiritual attacks.'

He detailed how he has over the years survived several of such attacks, including attempts on his life through food poisoning orchestrated by his best friend, who he alleges wants to take his political party from him.

Oh, God, My biggest mistake at the beginning of this year, I became lazy in my prayers and in picking off my spiritual Father's calls, knowing very well of the spiritual attacks on my life from both external and internal.

I pray nobody to ever be a victim of political spiritual attacks. Without God's intervention, you will be killed and buried spiritually before your actual Death.

They are very wicked people and will kill or destroy for power.
90% of politicians' death is spiritual, poisoning. or assassination. slow poisoning with mercury, med, crocodile Gourlblader, and more

At my well prayerful levels, God always reveals their faces and the evil deeds they plan against me before he intercedes for me. Sometimes is like a movie being played for me.

Trust me guys, God is the only one that has kept me alive to date. 4 months to the end of last year I woke up blind with swollen eyes one morning. My wife and I immediately started praying to God, God is my witness, how he revealed the face of the one who tried getting Me blind.

When I run to my uncle to inform him of my predicament, and how during the prayer God put me to sleep and two Margot's came out of my eyes spiritually, and he God told me the last one will be out the next day, and it did.

After About four weeks I got a call to inform me the man is blind and has lost his job. I have been asking God why? this is a person I always supported. His former boss is my good friend, but I have been stopped from all corners not to intervene for his job back. A story for another day guys.

Guys, my best friend who also comprised with them for a position when they ever win power. and fed me with food poisoning is going through a lot now.

Can you believe after surviving food poisoning and confronting him, and why did he sneak his name into the party as a co-founder and gave himself 20 rights to select national executives and gave me only 10 rights, and sneaking in lots of powers to himself without my consent or knowledge.

The only thing he told me in a very shaky voice. He was trying to protect the party for my wife and children in case ever die.

And the Golden question I threw to him was. Are you my next of King ? are you my family member? And why did you sneak all in without my permission?
A topic to discuss on another day. The good news is, all have been fixed. He is no more my best friend.

Yes sometimes I feel like going to support or standing by him on what is happening to him now, but I am always afraid to make such a move for the fear of my life. Even though all my friends are against me ever getting back to him with forgiveness.
is sad how greed has ended our ten years of brotherhood, how we have been there for each other. We shared bread.

Love you all and remember God is always Good.