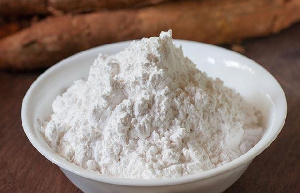 According to the report, such new markets including Nigeria and the European markets notably Poland, Portugal, Italy present strong potentials for market diversification and penetration for Ghanaian companies and Trade Promotion Organisations.

Interestingly, despite Ghana having huge existing market for cocoa derivatives including chocolate in the Nigerian market, the market share of Ghana’s cassava starch industry in Nigeria, despite its proximity, currently remains zero per cent.

In 2018, exports of Ghana’s cassava starch generated close to US$1 million in revenue. However, the United States emerged as the largest importer of the product with export value of US$935,000, representing 95 per cent, whiles the remaining, though marginal, was absorbed by the European Union market.

In that same year, US total imports of cassava starch amounted to US$82.2 million with Ghana emerging as the 6th largest supplier.

As Ghana is making commitment to commence the operationalization of the Africa Continental Free Trade Area (AfCFTA) which seeks to increase intra-African trade from the current 12 percent of member countries total international trade to 52 percent by 2023, Ghana Export Promotion Authority is admonishing exporters in the industry to target African countries, such as Nigeria, to increase their export sales.

Again, the Authority insists that to overcome overlapping export sector priorities, it is imperative industry exporters focus more on increasing its market share in European markets notably Italy, Belgium among others while holding on to its existing market shares elsewhere.

This has become necessary since reports suggest that with the implementation of AfCFTA, it is likely neighbouring African countries around Ghana will be competitors rather than export market destinations with regards to most agricultural products.

Global demand for cassava starch is currently estimated to be more than US$1.8 billion. In 2018, the global cassava starch market reached a volume of 8 million tons, representing a Compound Annual Growth Rate (CAGR) of around 5 per cent.

By 2024, the market demand for the product is expected to be more than 10 million tons, expanding at a CAGR of around 4 per cent from 2019 to 2024, a report conducted by market research firm, IMARC Group indicates.

China remains the largest importer of the product with an estimated import value of US$938 million in 2018. Other notable global importers are Indonesia (US$185.6 million), Taipei Chinese (US$138.1 million), Malaysia (US$123.6 million), USA (US$82.2 million), Japan (US$58.5 million) and Philippines (US$54.4 million) these being the top 6 importers, with Ghana being ranked in 57th position regarding exports.