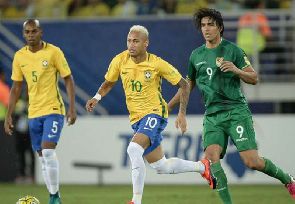 Neymar scored his 300th career goal on Thursday as gave Brazil an early lead against Bolivia in World Cup qualifying.

The Barcelona star linked with Manchester City-bound forward Gabriel Jesus to lauch a counter-attack that ended with Neymar rolling the ball into an empty net.

It was the 24-year-old’s 49th goal for his country at senior level, while he has netted a further 18 at various youth levels for Brazil, including under-17, under-20 and the Olympic side.

He has hit 95 since joining Barca, adding to the 138 he claimed at his first club, Santos.