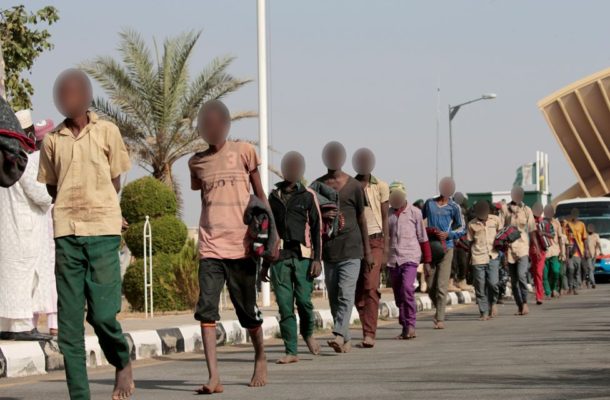 A notorious gang leader behind the abduction of more than 300 students in Nigeria in December has been killed by a rival gang, officials say.

Auwalu Daudawa was reportedly ambushed while attempting to steal a herd of cattle from an armed group in the north-western state of Zamfara.

Daudawa is said to have carried out December’s kidnapping in Katsina state.

He was given an amnesty as part of a peace deal in February but reportedly returned to his gang earlier this week.

Under the terms of February’s deal, Daudawa was pardoned in Zamfara state after he said he repented and handed over his weapons to the government.

Members of his criminal gang were promised accommodation by state Governor Bello Matawalle, along with assistance to help improve their livelihoods.

On Friday, Daudawa and four other members of his gang were fatally shot in an exchange of fire in a forest near the border with Katsina, a local official told AFP news agency.

“He led his men on a revenge mission to avenge the death of two of his men by the rival gang during a failed raid on one of his camps last month,” the official added.

The kidnapping of hundreds of schoolchildren in Katsina state in December, which was said to have been led by Daudawa’s gang, was one of a number of raids blamed on bandits looking to secure ransom payments.

The students were reunited with their families a week after they were kidnapped.

The government later insisted that no ransom was paid in that instance, but that the boys were released after negotiations with the kidnappers.

The BBC’s Africa editor, Will Ross, says news of Daudawa’s death is likely to reignite the debate on whether deals should be struck with notorious criminals.

Such gangs have made student kidnappings a lucrative business in Nigeria because of ransom payments, our correspondent adds.

Schoolchildren, along with a number of business and political figures, have been kidnapped at various times and released after a ransom was paid – although not on the scale seen in December, when more than 300 boys were abducted from their boarding school on the outskirts of Kankara town.

The Islamist militant group Boko Haram said at the time that it was behind the raid, and that it had recruited local gangs to carry out the attack.

Boko Haram has previously targeted schools because of its opposition to Western education, which it believes corrupts the values of Muslims. The group’s name loosely translates as “Western education is forbidden”.