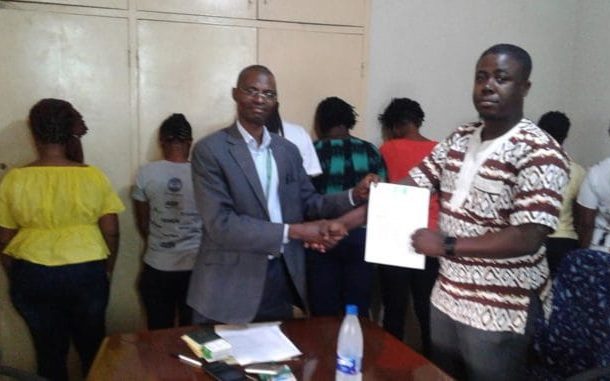 The eight suspects were handed e over to the Ghana High Commission,

Officials also suspect the ladies could possibly be victims of human trafficking.

The suspects, who were arrested Officers of the Nigeria Immigration Service (NIS)on Monday, were said to be passing through the Lagos airport to Kuwait via Libya, where they hoped to cross over to Europe.

The NIS officials were said to have suspected the ladies immediately they approached the immigration counter and queried them on their mission out of the continent through Nigeria with Ghanaian passports.

“The airport command arrested eight Ghanaian ladies and after profiling them, they were taken to National Agency for the Prohibition of Trafficking in Persons(NAPTIP) for further investigation and possible prosecution,” The NIS Spokesperson, Sunday James said.

A source close to the command stated that upon questioning, the ladies who were between the ages of 20 to 25 confessed that they wanted to use Nigeria as transit to Europe.

According to the source, the ladies had no genuine reasons for attempting to use Nigeria as a transit point to Europe.

The source said, “So, this led to further queries from our officers. When they were asked, they confessed to the fact that they were actually heading to Europe, but had hoped to land in Kuwait first. During interrogation, it was discovered that the ladies in question actually entered Nigeria through road from Ghana to Togo and then to Benin Republic.

“This is not the first time we are arresting human traffickers at this airport and we will continue to increase our surveillance to ensure that unscrupulous elements don’t use our command to perpetuate their criminal activities.”

NAPTIP’s preliminary investigations confirmed that the ladies, who are between ages 24 and 34 are possible labour migrants, six of whom have previously worked in Kuwait, Dubai, and Saudi Arabia, from whence they returned to Ghana at the expiration of their visas.

Prior to their interception, the women reportedly left Ghana and arrived Nigeria with the aim of boarding an Egypt Air flight to Cairo, then proceed to Kurdistan, Republic of Iraq.

They have since been  handed over to the Ghanaian authorities for further actions.