No deadline extension for NSS personnel 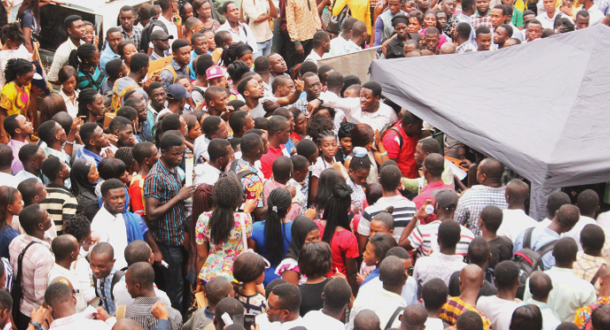 The National Service Secretariat (NSS) has said that it will not extend the deadline for the registration of service personnel for the 2016/2017 year.

According to the NSS, it has given enough time for the graduates to register for the new service year.

The Public Relations Officer (PRO) of the Secretariat, Ambrose Entsiwah, told Radio Ghana:”Registration started from the 18th of July to the end of August. We expect that by this time, almost everybody would have gone through the registration process.”

He, however, explained that the registration process had two stages, the second of which was the biometric registration which had caused some delays.

He stated that personnel would be allowed to report to duty at the beginning of the month but should complete the registration process by the September 15th.

“The second part has to do with the biometric registration for the National Service personnel ID cards which is delaying because of the slow process being adopted by the National Identification Authority.”

Ambrose Entsiwah cautioned that anyone who failed to register before the set date would have to forfeit their allowance for the month.

His comments come on the back of appeals from some prospective National Service personnel for an extension of the deadline.

With days to go until registration ends, several potential National Service Secretariat (NSS) personnel have not yet been registered.

Some of the graduates who had been forced to wait in long queues for hours, expressed concern about the limited number of personnel who were processing the forms at the Greater Accra Regional office of the NSS and the slow pace of those who were on duty.

“The personnel over there are slow. Even the machines used in processing the biometric pictures are limited. We need to have enough machines as compared to the vast number of the people gathered here. One thing that I believe will help all of us is the extension of the deadline. There are many people who haven’t even started registration due to their schedules,” one of them said.

Another prospective registrant said; “We need more space, more machines and more people to work because at the initial stage, it was two people, one person collecting for both private and public institutions when two people can easily do it for it to go faster. They seriously need more personnel because the biometric pictures are limited.”

There have been several complaints from the registrants about the machines being used. According to them, the machines are not enough and some had even broken down.

“It’s very cumbersome because we have been here since 8:00 am and we are yet to be called to register. They need more machines and more personnel. They need more computers to make the process faster,” another registrant said.

The exercise is expected to see more than 70,000 service personnel, drawn from 137 private and public institutions, register to be engaged by agencies across the country.