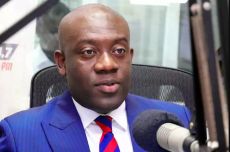 Mr. Kojo Oppong Nkrumah, Minister of Information Designate, has said, the proposed Normalisation Committee, to be set up by the Federation of International Football Association (FIFA), is expected to complete its work by March 31, 2019.

He announced this at the Meet-The-Press, organised by the Ministry on Wednesday.

According to Mr. Oppong Nkrumah, the committee when established would run the day-to-day affairs of the Ghana Football Association (GFA), review the statutes of the GFA to be in conformity with that of FIFA and the Confederation of Africa Football (CAF).

He added that, the Normalisation Committee would also supervise the conduct of elections on the basis of new statutes.

The Information Minister Designate said, a FIFA delegation is expected in Ghana to work on the formation of the committee.

He said the delegation would assess the suitability of the proposed names for the formation Normalisation Committee.

Football activities have been at a halt after the famous Anas Expose, which filmed officials of the GFA, engaging in acts of bribery and corruption.

This led to attempts by the Government of Ghana (GoG), to dissolve the GFA, but the move had to be shelved due to the intervention of FIFA.