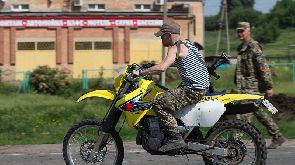 A notorious warlord has been killed in a bombing in the rebel stronghold of Donetsk, separatist officials said.

The separatist Donetsk News Agency said that Arsen Pavlov, also known as Motorola, was killed on Sunday in Donetsk when a bomb exploded in an elevator in an apartment building where he was staying. He is one of several prominent warlords who have been killed in bombings in the past year which Ukraine watchers attribute to infighting among the separatists. Pavlov once admitted killing 15 prisoners of war.

The conflict between separatists and Ukrainian government forces has been raging since April 2014, killing more than 9,600 people.

Russian-born Pavlov, 33, worked in a car wash before he crossed the border and joined the separatists in 2014 before becoming one of the most recognizable faces of the Donetsk separatist movements.

Ukraine still has not adopted a law which under peace accords signed in 2015 will grant amnesty to Donetsk separatists. Pavlov was one of the figures that the Ukrainian government has used to back up its assertion that people implicated in war crimes should not be allowed to get away with it.