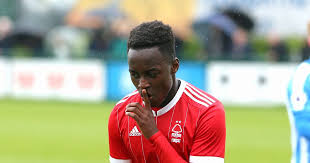 Nottingham Forest boss Aitor Karanka has expressed his belief that Ghanaian youngster Arvin Appiah will add firepower to his side.

The Spanish manager is defiant that Appiah, 17, will be instrumental for the club despite the willingness to add another striker to their ranks before the loan window closes on Friday.

But, as he prepares for the trip to Brentford at the weekend, he is also encouraged by the attacking threat his side showed against Premier League Newcastle United, from all areas of the team.

Gil Dias, Joao Carvalho and Joe Lolley were all outstanding against the Magpies, while Ben Osborn also impressed after coming off the bench.

And Ghana's Arvin Appiah would have been given his first-team bow if not for Forest being forced to make other substitutions by knee injuries suffered by Lolley and Sam Byram.

“The main thing for me is to have the squad that I have to play against teams like Newcastle, even without a (recognised) striker on the bench, and to be able to beat them – and the spirit of the team," he said.

“Because with this spirit and with the players we have now, it is enough."

“There was attacking threat in the side through Dias, Lolley, Carvalho and Ben Osborn – and we have Diogo Goncalves and Arvin Appiah.

“We have a lot of players, even with a lot of injuries. We did not have players available like Grabban, Soudani, Dawson, Guedioura – but even missing four or five important players for the team we were able to win against a Premier League team.”

The teenager was on the bench at the City Ground on Wednesday and the plan was to give him a runout against Rafa Benitez’s side.

“It was our thought to give Arvin a chance off the bench, we felt this game was for him,” said Karanka.

“But having to make two substitutions for the injuries, we could not do it in the end.

“If he keeps working in the same way, he will soon have his chance because he is a very good player.”