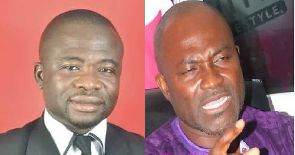 A former Deputy Communications Director of the opposition New Patriotic Party (NPP), Michael Ampong has said nothing will stop him from suing fire brand politician and party member Kennedy Agyapong for defamation.

According to him, Kennedy Agyapong who’s also the Member of Parliament for Assin Central has alleged that the deputy Chief of Staff had given him (Ampong’s) group, National Youth Leaders Forum, $ 5 million to create disaffection for the NPP, a claim he strongly refute.

He’s asked the Maverick MP to publicly retract the statement or face a legal action.

Michael Ampong disclosed that he’s made a formal complaint to the Inspector General of Police and the National Security apparatus to investigate his group over their operation since October 2016 to establish if such an allegation could be confirmed.

“I’ve made a complaint to the security agencies, because this allegation put out there by Ken Agyapong has security implications for me, because he’s inciting the public against me and I need not sit down. I’m filing a suit against him and the media house that allowed him to use their platform to defame me. The money he’s talking about is very big, I’ve never seen such amount before. I could be easily attacked because someone may believe that I have received the money.

He added:We are going into an election, NPP wants to win power, this allegation may get someone to attack me believing that I’ve sold the party. “I don’t want to behave like Paul Afoko, Kwabena Agyepong or Sammy Crabbe, I’m going straight to court, to determine my guilt or otherwise in this matter. I have no personal issues against Ken Agyepong, I just want the truth to come out.”