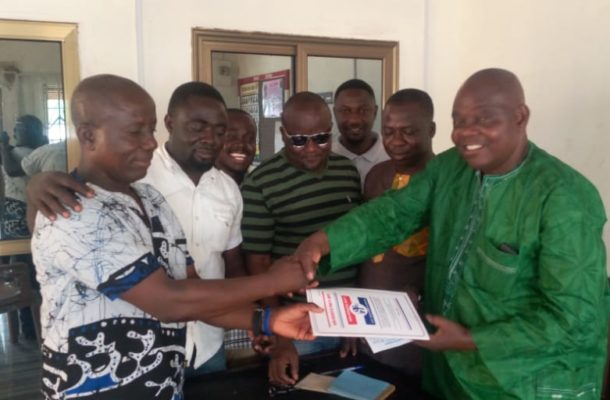 A representation of Hon Opare-Ansah after picking nomination forms

Member of Parliament (MP) for the Suhum Constituency in the Eastern Region, Frederick Opare-Ansah will have a keen contest in the upcoming NPP Primaries as Kwadwo Oboafo Asante has picked nomination forms to give the incumbent a fierce battle.

Hon Opare-Ansah, popularly known as "Suhum Mugabe" has been one of the longest-serving MP in the Region has also picked the nomination forms to seek for his fifth term.

He has become a threat in the area, as anybody who attempts to contest him end up losing abysmally after unseating the former MP, Ransford Agyapong in 2004 including the current MP for Abetifi, Bryan Acheampong who lost to him on three consecutive contest.

Opare-Ansah, a student leader at KNUST became an MP in January 2005 and was the former Deputy Minister of Communications in 2008 under Ex-President John Agyekum Kufour Administration.

He retained seat and returned to parliament in 2009 and became Minority Chief whip from 2009 to 2013.

He has been a member of Ecowas Parliament since 2011 and was a Ranking Member for Communications committee from 2013 to 2017.

He is the current Chairman of the Communications Committee in Parliament.

His contender, Kwadwo Oboafo after picking his forms, urged his supporters who led him to the party office with a brass band to stand for a clean campaign by avoiding insult and acrimonies.

According to him, picking the forms marks the beginning of a clean campaign and a victory.

He affirmed that Suhum NPP needs a change and for that matter, calling on the good people of Suhum to give him the nod to represent them.

He added that it is about time the constituency gets new leadership which he believes will bring development in the area.

"Knowledge does not reside in one person. If somebody has done it then it means that somebody can also do it better and that is why we are coming" he added.

He assured his people of victory come 25th April in his quest to bring development to Suhum.