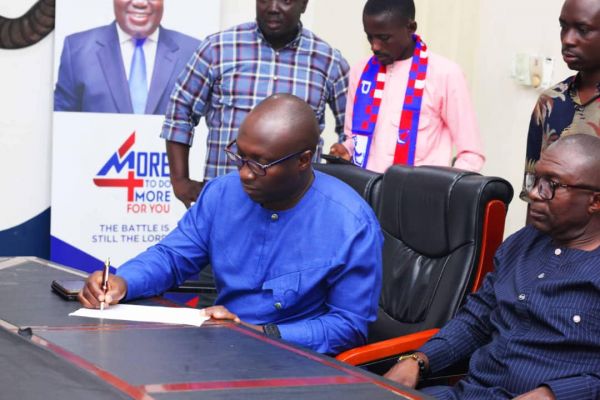 This portal has information that the National Executive Committee (NEC) in consultation with the National Council of the New Patriotic Party (NPP) are considering appointing Deputy officers for the newly elected national executives of the party.

A source said the party would also by convention pick the views of persons they would settle on with the elected officers.

This, the source noted was to allow the elected officers to know who they may be working with and to ensure compatibility of ideas and thoughts.

From our source, an internal search by the party, Dr Kwame Afriyie, Head of the Health Committee of the Western North Region is likely to be appointed deputy organiser for the NPP.

DETAILS:
Readers may recall that weeks to the national executive elections, Dr Afriyie rescinded his decision to contest for the national organizer position.

He subsequently by a press release stated that he was opting out of the race on personal reasons and later at a press conference stated his support for Henry Nana Boakye.

At a recent meeting before last Saturday’s elections, the medical practitioner was seen in the company of the newly elected organiser, Henry Nana Boakye campaigning in the Western North Region.

Our source hinted that in an independent poll conducted before the elections, Dr Kwame Afriyie finished second to Nana B and was very popular in the three Bono regions as well as the Western enclave of the country.

BACKGROUND:
Having worked for the party since his youthful and university days, Dr Kwame Afriyie would bring to the deputy organiser position experience gained over two decades.

Playing various roles since completing medical school, the medical practitioner has been part of the NPP health team for the Western North Region.

He was part of the party’s health outreach team for elections of 2020 and previously.

With a background of good human relations attitude and an unquenchable patriotic spirit, Dr Kwame Afriyie is seen to be a perfect deputy to compliment the skills of the former youth organiser and now National Organiser, Henry Nana Boakye.