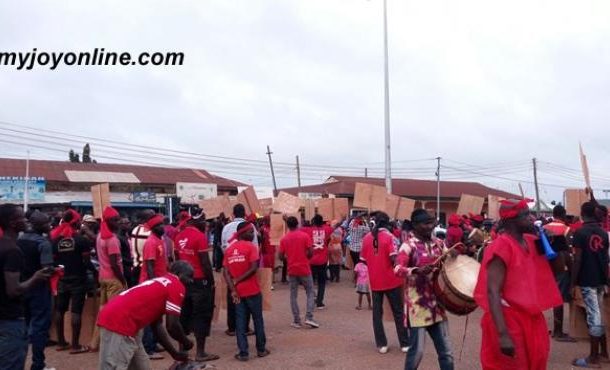 The opposition New Patriotic Party (NPP) says it will head to the Wa and Bolgatanga with the ‘times are hard’ demonstration if government fails to meet their demands within two weeks.

A Deputy national Communications Director of the NPP, Anthony Karbo, announced the intended demonstration in the Upper West and Upper East regions at the Zogbeli Park to climax the Monday protest.

He said small scale industries in the Northern, Upper West and Upper East regions are collapsing because of the high electricity tariffs.

He urged the electorates in the three regions of the north to reject the Mahama-led National Democratic Congress (NDC) at the December 7 polls.

According to him, Ghana needs a Nana-Bawumia government to fix the nation’s ailing economy.

During Monday’s street protest, the Northern Regional Police Command was unable to provide protection to demonstrators.

Police disclosed it did not provide protection for residents who demonstrated because of security reasons.

Regional Police spokesperson, Ebenezer Tetteh, said they advised the leadership of the protesters to reschedule their demonstration because of President John Mahama’s visit on that day and the airlifting of Hajj pilgrims but they were not heeded.

The Tamale Township was brought to a standstill when a coalition of opposition political parties mobilized their numbers to demonstrate against the hardships in the three regions of the North and in the country in general.

The demonstration dubbed “Di Mii Ya” translated as “Times are hard” was held at a period when President John Mahama was in the region campaign ahead of the 2016 general election.