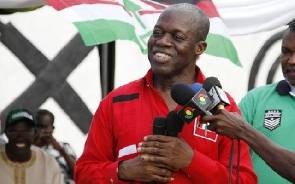 Vice-President Kwesi Amissah-Arthur has questioned the kind of change being championed by the opposition New Patriotic Party (NPP) and described it as a change that poses a threat to Ghanaians.

Mr Amissah-Arthur argued that the change Ghanaians yearn for is already happening under the Mahama administration, adding that any other promise would be hostile.

“This change that they are talking about is different. They are threatening the people of Ghana with change. The change that is transforming Ghana is already happening, so why do you go for a change that is a threat to the stability and to peace?” he asked.

Speaking at the NDC’s campaign launch in Cape Coast in the Central Region on Sunday, 14 August, Mr Amissah-Arthur explained that when older folk wanted to frighten young children, they would falsely claim that masquerades were approaching, which would scare children to flee into hiding.

But he said, Ghanaians “will not run” because of the NPP and its change agenda, adding that change “is already happening under President Mahama”.

He pointed out that Ghanaians “want change that improves things and is inclusive and all that will be gotten under John Dramani Mahama”.