NPP will return Ghana onto a path of stability - Kufuor 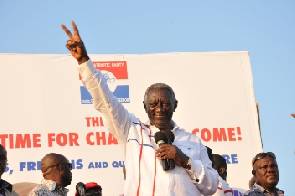 Former President John Kufuor has opened the New Patriotic Party manifesto highlight program with an assurance that the NPP will return Ghana onto a path of stability and development if elected into office in 2016.

Addressing accredited party supporters, representatives of established institutions, think tanks, the former president said the time has come for the NPP to take over the affairs of Ghana and reaffirm the vision and mission of the NPP to uphold the rule of law, good governance and social advancement.

The NPP, after some postponement, announced October 9, 2016 as date for its manifesto launch at the Accra International Trade Fair Centre.

The morning of the manifesto launch was characterised by a rainstorm which got parts of Accra flooded but that did not stop supporters from converging at the venue.

With the blue, red and white colours of the NPP flying, interspersed with pockets of the Ghana flag in one of the Trade Fair pavilions, the NPP supporters welcomed the ex-president with a thundering round of applause and with shouts of "papa odenden" [welcome daddy].

Walking with the help of a stick, but motivated by promise and a burning desire to return the NPP into office, Ex-president Kufuor mounted the podium with a charge to all Ghanaians to undertake to allow the NPP take over the affairs of Ghana and ensure that the country is brought back onto a solid path of development.

He said a lot of fetish has been made about the writing of manifestos but added that manifestos are neither an assurance of victory at the polls nor a promise of development if not backed with hardwork and competence.

Unlike other manifestos which he said are a collection of promises and scholarly work to impress, Mr Kufuor said that of the NPP is a commitment to upholding human dignity and development, good governance and rule of law.

He said the NPP's ideology of property owning democracy, handed down by the doyen of Ghana's politics, JB Danquah is to liberate the energies of the people and harness their potential to create wealth for all.