The National Service Secretariat (NSS) has released the postings for the 2019/2020  service year.

A total of 77, 962 personnel have been deployed to do their mandatory one-year national service.

Out of the number, 66,348 have been deployed to the public sector, representing 85.1 % of the total posting.

Some 6,000  have been deployed to support the Agric sector including Planting for Food and Jobs Policy.

Regional Distribution
The trend in the Regional distribution with regard to requests, choice of Regions and deployments have not seen much changes compared to the previous years. 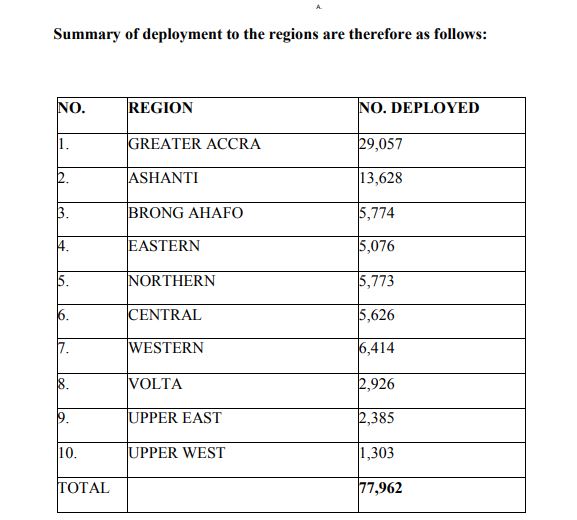 Registration and checking of postings

Prospective service personnel are to take note that they cannot print out the appointment letters until Friday, 19th July 2019.

Postings registration will commence at all Regional Centre across the country from Monday, 22nd July 2019 and end on Friday, 30th August 2019.

This period is provided to give service personnel sufficient time to go through the registration processes before they formally begin their national service on Monday, 2nd September 2019.

Unlike previous years, national service personnel would be required to seek the consent of the user agency to which they are posted, before submitting the final document for approval at the office(s) of the Scheme.

To avoid instances of impersonation or attempt(s) by unscrupulous persons to compromise the process, all prospective service personnel would be required to provide their Students’ Identification Cards and any one of the following – valid Ghanaian Passport, Voter Identity Card, or Drivers’ License.

National Health Insurance Identity Cards are however not acceptable.

Management of the scheme wishes to advise prospective national service personnel to stay away from people who may approach them to offer them assistance to change their postings.

Such unscrupulous persons should be reported to any officer of the Scheme or the law enforcement agencies for the necessary action to be taken against them.