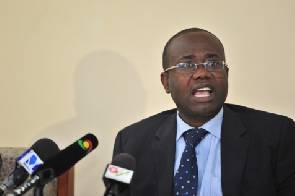 The newly-elected member of the FIFA Executive Council, Kwesi Nyantakyi, has promised to use his new office to develop football in Ghana and Africa as a whole.

Nyantakyi, who doubles as the president of the Ghana Football Association (GFA), noted that he was ready to transform African football by working hard within the Council in the interest of the continent.

The Wa All Stars bankroller bagged 31 votes to place second behind Guinea’s Almamy Kabele Camara, who polled 37 votes, with Ahmad of Madagascar following closely with 30 votes, while Augustin Senghor had nine votes.

Addressing the media on his arrival at the Kotoka International Airport in Accra yesterday, Nyantakyi said, "I am looking forward to using my new role to help in the development of football in Ghana and Africa as a whole".

"This will enable me to work harder within the FIFA Council to push African football forward in the interest of the continent," he added.

He thanked Ghanaians for their immense support and promised not to let them down.

The GFA boss is expected to serve at the top hierarchy of the world football governing body until March next year when he will be due for a re-election.