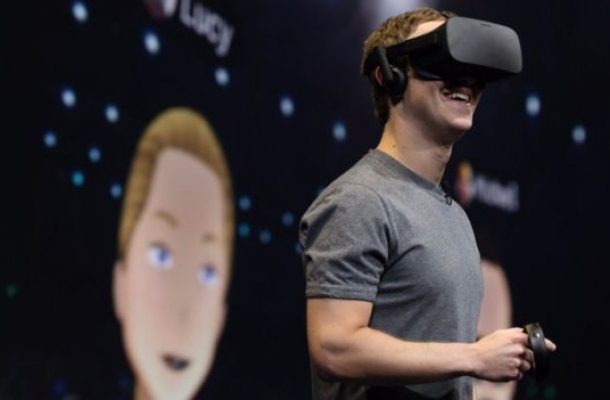 Oculus, the virtual reality company owned by Facebook, is working on a new headset in an attempt to make the technology more affordable. On stage in San Jose, Facebook founder Mark Zuckerberg acknowledged the prohibitive cost of the current Oculus Rift headset. During the presentation he also demonstrated software for interacting with friends in virtual reality. Missing, however, was the Oculus co-founder Palmer Luckey. The 23-year-old, normally a fixture of the company’s events, was recently revealed to be funding an online campaign in support of Presidential candidate Donald Trump. He later apologised. A spokesman told the BBC Mr Luckey did not attend the event as he wanted to avoid being a “distraction” to the day's announcements. Mr Luckey was not mentioned, nor did he appear in any of the promotion videos shown during the keynote presentation. Technology analyst Ben Woods, from CCS Insight, said Mr Luckey’s role at the company may be limited in future. “I think even without that distraction, which was unfortunate, he probably wouldn’t have had a big role here anyway. "The company has moved on from someone jumping on stage in flip-flops and Hawaiian shirts saying crazy stuff - it has to professionalise if this is to be a cornerstone of Facebook’s future." Holy grail The event, Oculus’s third ever developer conference, comes as it faces fierce competition in the VR market. Earlier this week Google showed the first version of Daydream VR, its headset which is powered by mobile phone. And next week Sony is set to launch its PlayStation VR headset. It will work with the PlayStation 4 console, making it a considerably cheaper than the Oculus - though not as powerful. At the higher-end of the VR market, HTC Vive has been well-received by gamers and has the backing of PC gaming giant Valve. It leaves Facebook in need of a holy grail headset that offers high-end visuals and interaction at a price more akin to the lower end models currently on the market. That’s being worked on now, Mr Zuckerberg said. “We believe that there is a sweet spot - a standalone virtual reality product that is high quality, that is affordable, and you can bring with you out into the world. "It’s still early, so I don’t want to get your hopes up too much." The key innovation will be in using Computer Vision Software (CVS), Mr Zuckerberg said. This would enable the headset to see what’s around it and detect its own movements - allowing the wearer to walk around freely. Currently, the Oculus Rift - and other high-end headsets - use a series of sensors to track the person’s movements around a set area. Social interaction As he has done in the past, Mr Zuckerberg referred to virtual reality as the next major computing platform. On stage, he demonstrated a VR environment for interacting with friends. Mr Zuckerberg was placed in a virtual environment with two colleagues. Each could see an avatar of each other - a cartoon-like figure designed to resemble the real person. Using the Oculus Rift’s handheld touch controllers, each avatar could be controlled to show a range of emotions such as laughter and shock. Voice sentiment analysis was also used to convey emotions on the avatars. In the same demo, the surrounding environment was changed to a 360-degree video of Mr Zuckerberg’s front room - along with his dog, Beast. Here, Mr Zuckerberg was able to take a real-world video call from his wife, Priscilla Chan. It was a baffling array of technologies laid on top of each other, and an intriguing glimpse into what a social network like Facebook might become in the virtual world. Product releases It will take some time before this software is ready, and the Facebook founder will have a task on his hands to convince users that hanging out with friends virtually can be a comfortable experience. “It’s more of a statement of intent then something consumers will be able to get their heads around today,” said Mr Wood from CCS Insight. "Virtual social presence is really Mark Zuckerberg’s big commercial bet as a future chapter for Facebook. "We’ll look back on today and see that it’s a pivotal moment in how Facebook envisions VR in its mass consumer offering.” In the run up to Christmas, Oculus is putting out some long-awaited pieces of hardware. Its handheld Touch controllers, first announced more than a year ago, will be released on 6 December, and will cost $199. Additional motion sensors, which will allow “room scale” VR so players can move around more freely, will soon be able to be bought separately for $79 (£63). There will be 35 new gaming titles available when Touch launches, Oculus said, a number which may rise. Of the new offerings, it was Epic Games' Robot Recall, a comedic take on a robot revolution, that stood out.