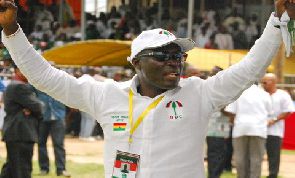 The National Democratic Congress (NDC), has targeted 70% of votes for President John Mahama in the Odododiodio constituency of the Greater Accra Region on December 7.

According to the NDC Member of Parliament for the area, Nii Lantey Vanderpuye, the votes from the constituency will guarantee John Mahama’s victory in the 2016 elections.

Speaking at his campaign launch in Accra on Sunday, Vanderpuye said he will also garner 70% of the vote in the constituency.

“This time I am committed to making sure that we get the 70% target and the message is simple, I want John Mahama retained as president of this country. He’s done so much, he’s laid a solid foundation that we in this country cannot allow to be messed up and since Odododiodioo decides elections in Ghana, I want to make sure that we give John Mahama the 70% that he deserves to continue the good works, to continue changing lives and transformation in Ghana.”

He also admonished the opposition New Patriotic Party to forget the 2016 election because they’ve already lost in advance.

The NPP has however vowed to take back the seat, after it elected Nii Lantey Bannerman to champion that course in the constituency.