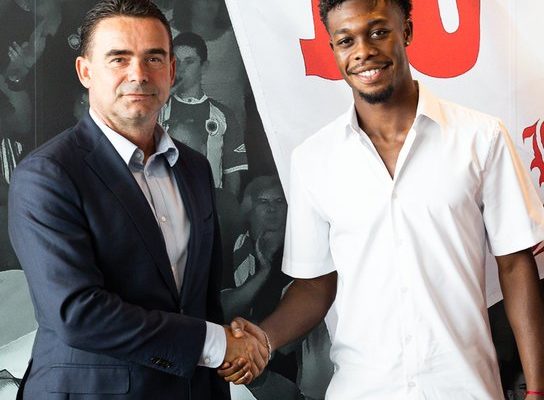 German-born Ghanaian midfielder, Christopher Scott has completed a transfer move to Belgium Jupiler Pro League side Royal Antwerp F.C  from Bayern Munich II.
The attacking midfielder Christopher Scott passed his medical exams on Wednesday before the announcement was made.

The promising midfielder arrived from the Bayer 04 Leverkusen academy in 2020 amid comparisons to Kai Havertz and made his Bundesliga debut that April, but so far has only two appearances for the senior team.

Still, in two seasons with Bayern II he made  47 appearances and scored nine times across the third and fourth divisions of German football.

Scott has broken into the Germany international youth setup as well, and also retains eligibility for Ghana.

Due to the fact that Scott wants to play at a higher level than in the fourth division, his departure for Belgium is an understandable step.

"Over the past two and a half years, Christopher has developed from a youth player to an integral part of the amateurs. With the move to the Belgian first division, he now wants to take the next step. We wish him every success for his future path and will be his development very closely," said campus manager Jochen Sauer at the farewell.

Royal Antwerp at least reached the championship round last season, but ultimately had to settle for fourth place. Despite everything, the jump to the Belgian first division club is definitely a challenge for Scott, but one he has to face. At Royal Antwerp he meets Bayern legend Mark van Bommel, who takes over as coach and has certainly played an important role in weaving the youngster.

Most recently, Scott was linked with a move to Celtic Glasgow and Fortuna Düsseldorf.

However, a move to Fortuna failed due to the excessive transfer fee from Munich, who extended the contract by clause at the last minute to collect money.