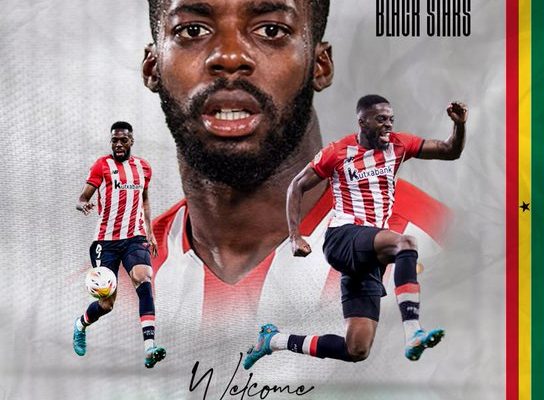 Athletic Bilbao striker Inaki Williams has announced that his nationality switch to Ghana has been completed and is ready to play for the Black Stars of Ghana despite turning down overtures from the Ghana Football Association (GFA) in the past.

This heightened speculations that the Bilbao born striker was ready to commit his International future to the Black Stars of Ghana.

Inaki Williams has taken to his Twitter handle to announce his Ghana switch is complete with a video about Ghana while tagging the official Ghana FA handle.

The striker was born in the Basque region of Spain to Ghanaian mother and a Liberian father who sought asylum in Spain some years back.

Ghana had made attempts to convince the striker to commit his future to them but it failed as he said at the time that he prefers to play for the land of his birth Spain.

He made his debut for Spain in 2016 in a friendly match against Bosnia Herzegovina which still made him eligible to play for the Black Stars of Ghana.

But since then he had been overlooked by subsequent Spain managers but with time running  out for the Bilbao striker he has now taken solace in playing for Ghana especially at the World Cup in Qatar.