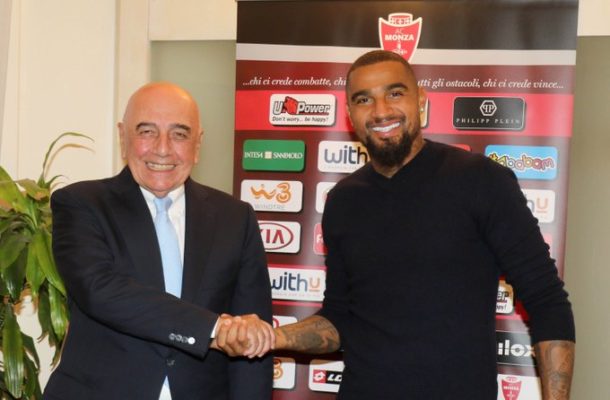 A.C Monza announces that it has finally acquired Kevin-Prince Boateng from Fiorentina, who has signed a contract until 30/6/2021, with the option of renewal for the second year, subject to certain conditions.

The 11th signing of the red and white summer is a player with a prestigious resume, with experiences in Milan, Borussia Dortmund, Tottenham and Barcelona, ​​among others.

Born in Berlin on 6 March 1987, but Ghanaian International, he grew up in Hertha Berlin where he played until 2007, when he was bought by Tottenham with whom he won his first title, the English League Cup.

After the experiences with Borussia Dortmund and Portsmouth, here is the move to Milan in the summer of 2010.

With the club of Silvio Berlusconi and Adriano Galliani he immediately won the Scudetto and the Italian Super Cup.

He played at AC Milan for three seasons and then returned for a second spell in January 2016 for six months, where he was coached then by Cristian Brocchi, who now finds himself in Monza.

After stints with Las Palmas and Eintracht Frankfurt, where he won the German Cup, in the summer of 2018 he was back in Italy with Sassuolo, where he played very well earning him a move to Barcelona.

A season in Blaugrana with the conquest of La Liga, and here he was again in Serie A with the Fiorentina shirt.

The last experience before landing at Monza which will be his 13th club, was in Turkey with Besiktas from January to August 2020.