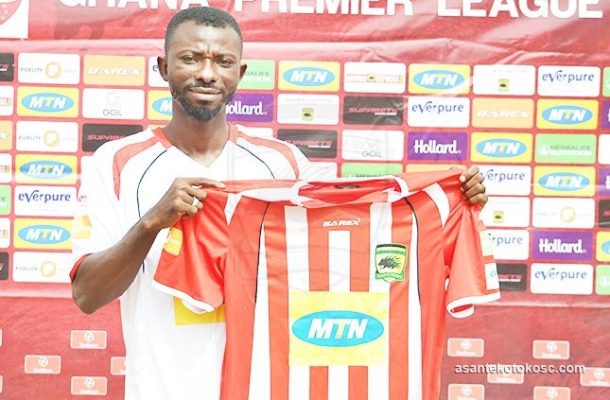 Asante Kotoko have announced the completion of the transfer of Jordan Opoku on a one-year deal in bid to boost the squad ahead of the coming 2017/18 season.

The player penned down his signature on contract documents at the club's secretariat on Wednesday, ending speculations over his future having been part of the club's preseason training.

The dynamic offensive midfielder joins the Porcupines for the third time having first done so from Feyenoord Academy in 2006, and left in 2011. He signed again for the Porcupines from Berekum Chelsea in 2013 and left in 2016 and has now earned a third stint - joining from Sakaeo FC in Armenia where he played in the 2017 season.

Jordan told asantekotokosc.com his target is to help improve the team for the tasks ahead.

"We will be playing on both the local front and in Africa and that requires a good team. I am here to do my part to help. Football is a team sport and so it won't take me alone to improve the team but the collective effort of everyone here," he said.

"I am here to do my part and i'm confident that my colleagues would also do theirs so that, together, we can put the team at a respectable position," he concluded.