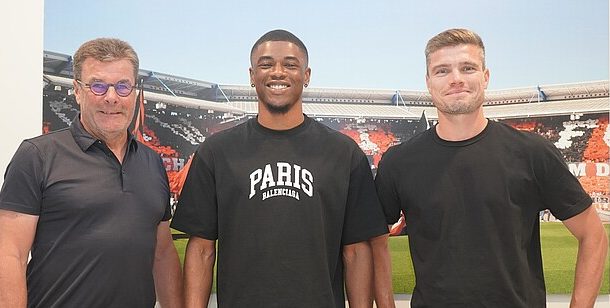 Kwadwo Duah joins the German second tier side  from the Swiss Super League side FC St. Gallen after he successfully passed his medical examinations and signing until 2025.

His move will cost his new club €700.000 after beating a raft of clubs to the signature of the prolific striker.

He will join the team for their training camp from June 26th to July 3rd in Natz/Schabs.

The London-born, 25-year-old striker comes to FCN from FC St. Gallen with a recommendation of 15 goals and four assists.

Dieter Hecking, Sport Board Member at 1. FC Nürnberg, on the negotiations: “This transfer went the way we envisioned it. Above all, we had excellent discussions with the former club player Alain Sutter, who works as a sports director in St. Gallen. They were characterized by mutual respect, solution-oriented and target-oriented.”

Olaf Rebbe , sporting director of 1. FC Nürnberg: “We've been following Kwadwo's path and development for a long time. He is one of the fastest players in the Swiss Super League and will help us with his goalscoring skills. He knows the kind of football we want to play. This will help him integrate. In addition, he fits perfectly into our group in terms of character and mentality.”

Kwadwo Duah: “The club has been trying hard for me for a year. I had the best feeling here, that's why I chose the club. I'm looking forward to the fans, to the stadium and to scoring goals here."