Oguaa chiefs on collision course with radio station over festival 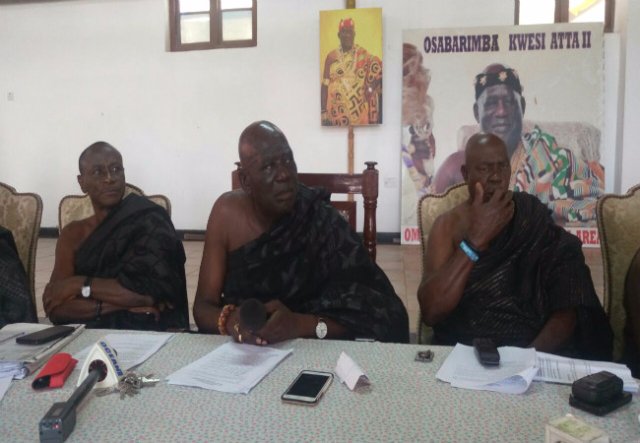 The Oguaa Traditional Council says it will not hesitate to cause the arrest of any company that attempts to usurp its powers guaranteed under the Constitution in the organization of the Oguaa Fetu Afahye.

This follows actions and utterances by two radio stations in Cape Coast that have vowed to organize a carnival during the Oguaa Fetu Afahye without the blessings of the Traditional Council.

The Chieftaincy Act 2008 act 759 mandates the Traditional Council who reserve the right as custodians of customs and traditions of their various jurisdiction to observe their festivals as they deem fit without any interference whatsoever.

Thus, companies and individuals who whish to do any celebration in line with the festival celebration are advised to seek permission from the respective Traditional Councils.

At a news conference in Cape Coast, the Council says, it feels scandalize by the abuses they receive daily from the two radio stations.

The organisation of Afahye has been the preserve of the Planning Committee of the Oguaa Traditional Council, however, for the past three years, Cape FM has been organising a carnival during the festival, albeit without the permission of the Council.

The radio station’s Orange Friday program was nearly marred last year due to last minute skirmishes with the Council.

According to Joy News’ Central Region correspondent, Richard Kwadwo Nyarko, the Council agreed to let the station host the event as they considered the investments they had made.

However, during the planning of this year’s Afahye festival, another company submitted a proposal to the Council to organise the carnival and they were selected over Cape FM.

This did not sit down with the radio station that has vowed to go ahead with their program.

According to the chief, cape FM with the support of other stations have been raining insults on them on their networks.

They say the stations are making denigrating and abusive pronouncement about nanamon, the Afahye Planning Committee and the Traditional Council.