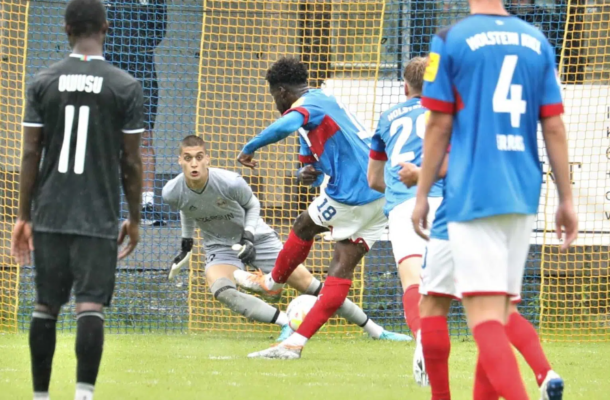 Black Striker Kwasi Okyere Wriedt scored for his side Holstein Kiel in a 2-2 drawn game in a pre-season friendly match against Azerbaijani side FK Qarabag.

On Wednesday afternoon, Holstein Kiel played the first of two friendlies as part of the training camp in Zell is See, Austria.

Both sides were up to speed from the start and promptly created their first chances.

Another Ghanaian striker Kwabena Owusu missed from a tight angle in the 5th minute for Qarabag, Holstein's first shot came from Sander when his shot was saved by Qarabag keeper Luka Gugeshashavili in the 9th minute.

A balanced game developed in which KSV had the following few opportunities when Fabian Reese's shot was just blocked for a corner (12') and Sander's header sailed past to the left (20').

Instead, the Azerbaijani champions and cup winners took the lead when Ramil Sheidev completed a counterattack (28').

From then on, Qarabag had a little more of the game but did not raise because Musa Gurbanli rounded Dähne, but let the Holstein goalkeeper push him too far and then pushed the ball past from a tight angle (38').

Shortly before the break, Gugeshashavili saved a strong header from Patrick Erras (44'). The Champions League qualifier followed up with the half-time whistle when Sheidev safely converted a penalty kick - Sander had left his leg against Leandro (45').

After the break, KSV got back into the game – and reduced the deficit with Sander's dream goal when he nailed the ball into the left side from 20 meters (56') to make it 2-1.

From then on, Holstein pressed for the equalizer, but Sander missed the quick brace when his flick just missed to the right (59th).

Niklas Niehoff then got two shots from the back, but the Qarabag goalkeepers saved both times, first Gugeshashavili (61') and a little later substitute Amin Ramazanov (72').

In the closing stages, the Storks got the deserved equalizer: After Fiete Arp was brought down in the penalty area, Wriedt confidently converted the penalty kick into the right corner (76').

Towards the end of the game, Marcel Rapp's team almost turned the game around, but Wriedt missed a Niehoff pass (82').

Holstein Kiel will play the second test match of the training camp on Saturday at 3 p.m. in Maria Alm against the Austrian first division side Wolfsberger AC.

"We didn't play intensively enough in the first half, but we got on well in the second half and deservedly equalized. We could have scored the winning goal, but overall it was enjoyable today,” said Marvin Obuz after his first 90-minute game in the Holstein jersey.