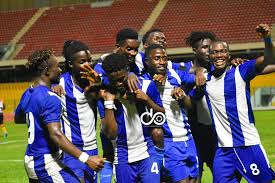 Accra Great Olympics stole the show at Sogakope with 3-2 over WAFA after reclaiming their lead with a wicked strike in stoppage time to go top of the Ghana Premier League.

A last minutes left hit from bulky striker Abdul Manaf Mudasiru dashed the hope of the home side, who had fought had to cancel Olympics 2 goals lead and were flying high in search of the winner.

Gladson Awako gave the visitors the lead with a stupendous free-kick in the 13th minutes  first half after his side had survived early WAFA scare.

He got his angle right  with precision and the power behind the the number 10-shirted man's kick was too good to be stopped.

But the outstanding Awako, who was also instrumental in the opening goal, fed Quaye and his cross was turned into the nest by Kelvin Boakye

That  set the platform for a second half of total WAFA domination that was nevertheless laced with anxiety at Oly bench as the host equalised with brilliance.

A ferocious attack got Enock Asubonteng and Justus Torsutey grabbing  the goals in the space of ten minutes.

They showed resilience fighting back to pull one back five minutes later through Enock Asubonteng following a dominant spell by the Academy Boys.

Justus Torsutey leveled with a brilliant strike to get WAFA back into the game with 15 minutes left.

They fought with everything in front of their fans  at Sogakope Red Bull Arena until Mudasiru climbed off the bench to clinch the winner.

Olympics now jumps to the summit of the league with 40 points.