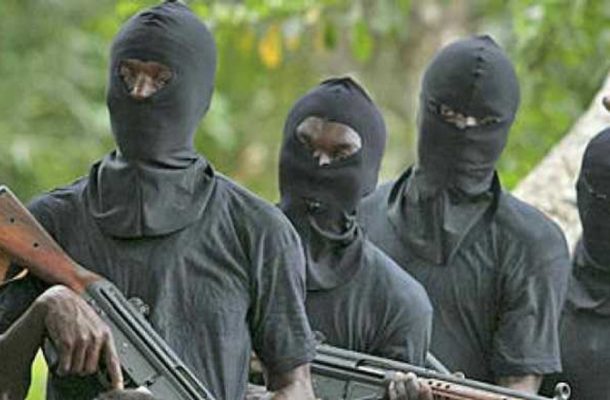 A female fuel attendant has been shot in the head during an attack by armed robbers on Glory Fuel Filling station at Akyem Abenase in Akyemansa District in the Eastern region.

The victim was rushed to a local health facility but referred to the Eastern Regional Hospital in Koforidua. Though her condition stabilized, she will be referred to Korle Bu Teaching Hospital.

Narrating the incident to the media, Doris Appiah who is also an attendant at the filling station and present during the robbery attack said, about 7:30 pm Thursday, May 12, whilst they were working, the two suspected armed robbers emerged on a motorbike and pointed their pump-action guns at them to surrender their monies and other personal belongings.

He said a woman who was unfortunately at the scene was violently pushed to the ground by the armed robbers while another worker was hit with the butt of the gun.

The armed robbers sensing danger abandoned the operation and escaped.

The local Police after hearing the incident visited the scene to commence an investigation, however, no arrests have been made.

Armed robbery attacks were rampant in the Eastern region but the menace has declined drastically following a strategic operation by the Anti Armed robbery squad deployed by the Inspector General of Police Dr. George Akufo Dampare.

But, in April this year, two gas filling stations in Koforidua and Larteh Akuapem were attacked by armed robbers.