Oppong Nkrumah, Pratt face off in politics of it can be done, it cannot be done 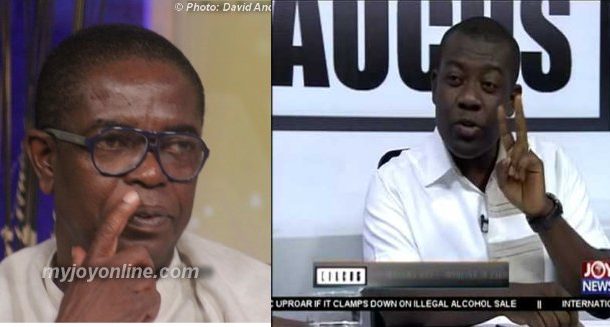 Two journalists turned politicians were embroiled in a heated political battle of wits and a contest over whether or not the New Patriotic Party's one village one dam, promise is feasible

Kojo Oppong Nkrumah, one time host of Joy FM's Super morning Show and now MP aspirant for Ofoase Ayirebi, held an incurable position that the one village, one dam promise, which he described as solution, was not only feasible but necessary.

Veteran journalist Kwasi Pratt, Editor of the Insight Newspaper, a member of the Convention People's Party on the other hand was vehement in his doubt, that the promise has failed the feasibility test and lacked clarity in substance

Host of Peace FM's Kokrooko program, Kwame Sefa Kayi was left in the middle, listening for a while and jumping in at some point to straighten issues up.

It started with a debate over whether the free ride Bus Rapid Transit program had taken a break for Tuesday. Oppong Nkrumah said he had heard and read from officials managing the BRT program that they will take a break on Tuesday in order for them to resolve some issues affecting the program but Kwasi Pratt said that claim was untrue.

According to Pratt, he heard one of the officials on radio Gold insisting that the free ride program which started on Monday was going to continue and that any claim of the program's suspension can only be the work of propagandists.

When an official of the company was called to confirm or deny whether the free ride BRT service was going to take place on Tuesday, the official said all the buses have been recalled to the office and that there will be no service, at least on Tuesday.

Then came the one village, one dam banter. Kwasi Pratt said given the flip-flop explanations given by NPP officials, he believes the promise was never going to be feasible.

He reported different NPP officials as saying that the dam can be a dug-out, or a bore hole, and three villages can use one dam.

Kwasi Pratt said with such inconsistent explanations, it is clear that the NPP officials themselves did not believe in the promise.

"A dam cannot be a bore hole or a dug-out. One village cannot be three villages to a dam", he fired.

But Oppong Nkrumah said whilst Pratt has the right to wallow in his doubt, he should not attribute same to him.

He said in his mind the policy is feasible and beneficial and the NPP will deliver on that promise if voted into power.

Oppong Nkrumah said all that is required is a competent leader who knows what is best for the people, adding, the issue about feasibility is only subjective.