Opposition parties to embark on demo in Tamale 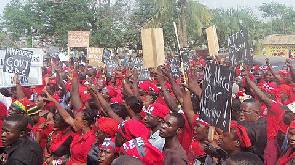 The Coalition of Opposition Political Parties in the Northern Region is set to embark on its planned demonstration despite police request fo a postponement.

According to the coalition, preparations for the demonstration are too far advanced to be postponed.

Four political parties, the New Patriotic Party (NPP), the Convention Peoples Party (CPP), the National Democratic Party (NDP) and Hassan Ayariga's All Peoples Congress (APC) and their supporters say they would embark on a ‘Times are hard’ demonstration on Monday, August 22 in Tamale.

Another party, the Progressive Peoples Party (PPP) also pledged their support for the demonstration.

Representatives of the parties say they have been forced to organise the protest to draw government's attention to the suffering the people have been enduring due to the unbearable utility tariffs.

According to some residents in the region, their electricity bills which used to be 30 cedis per month is now 180 cedis for the same power consumed.

The parties called on market women, traders, artisans, students and all persons affected by the high tariffs to join the demonstration on Monday.
This comes at a time that President John Dramani Mahama is campaigning in the northern part of the country.

According to Joy News correspondent in the region, Martina Bugri, police in the region wrote to the coalition to postpone the protest because the President may visit Tamale on Monday.
The coalition at a press conference on Sunday, August 21 announced their readiness for the protest despite the request.

They have called on their supporters to come out in their numbers for the peaceful march on Monday.