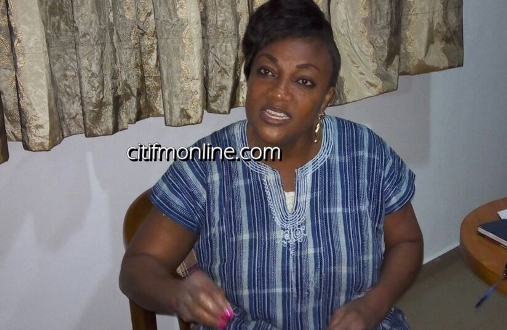 The NDC at the 2012 polls swept all seven Parliamentary seats in Gonjaland because President Mahama is one of their origin.

Daboya-Mankarigu, Damongo, Sawla-Tuna-Kalba, Salaga north and Salaga south, Yapei-Kusawgu and Bole-Bamboi are the seven Gonjaland Parliamentary seats out of the 31 constituencies in the Northern Region. According to her, President Mahama has outlived his usefulness and that does not deserve a second term in office.

Otiko Afisa Djaba insisted that the upcoming 2016 elections are not about one’s ethnicity but largely about electing the right leadership to better place Ghana within the scheme of global affairs.

“All the seven constituencies in Gonjaland went to the NDC because John Mahama is our brother. What has happened to SADA which the NDC introduced to reduce poverty in Northern Ghana. The incidence of poverty in Northern Region has increased by 80% and I want to say President Mahama has not been faithful to the Gonjas who voted for him. ”

The development of Ghana has reached a stage where we feel that Ghanaians deserve better and the 2016 elections are not about one’s tribe.

“President Mahama uses words to say he is transforming lives. He must walk the talk because the people of the three regions of the north are suffering.”

She touted Nana Addo Dankwa Akufo Addo as the most competent and incorruptible leader capable of assuaging the plight of Ghanaians who she opined have been subjected to untold hardships by the Mahama led NDC administration.

She urged the electorate to ignore what she described as the NDC’s vile propaganda against Nana Akufo Addo’s personality and believe in him to fix the nation’s myriad socio-economic challenges.

She tasked women folks in the country to arise for change by embarking on door to door campaigns to maximize the NPP’s electoral fortunes on December 7.

Mrs. Otiko said Nana Akufo Addo has the can do spirit and a vision required to improve the livelihood of Ghanaians.

“President Mahama uses words to say he is transforming lives. He must walk the talk because the people of the three regions of the north are suffering.” “President Mahama is not about talk, if he can’t do it he should step down and give way to Nana Akufo Addo to take over and make his big dream a reality.”

This is why Nana Addo’s one district, one factory and one village one dam agenda is a new beginning of transformational agenda, she explained.

“It is the gargantuan stealing that makes the NDC think that the one factory one district and one village one dam agenda is not feasible, it is feasible.”

She opined that rural women in Northern Ghana have been impoverished under President Mahama.

“People of Ghana another four years of NDC under President Mahama then we will all die. Let’s arise for change, for a new beginning and for a new hope.”

According to her, government’s sudden “U turn” promising to reimburse the DKM customers three months ahead of the December 7 polls is a desperate votes grabbing attempt.

She insinuated that some of the customers including pastors and business women committed suicide as a result of DKM’s liquidation.

Miss Otiko Afisa Djaba assured the frustrated DKM customers to ignore President Mahama and the NDC and have hope in Nana Addo’s new vision for Ghana.

She reaffirmed Nana Akufo Addo’s campaign promise to unearth management of the defunct DKM microfinance institution to reimburse them.

She claimed the DKM financial scandal among other improprieties forced the former Governor of the Bank of Ghana, Dr. Kofi Wampah to go on retirement ahead of his retirement age.

“John Mahama and the NDC are very wicked, incompetent and desperate and do not deserve another four years in office. The eight years of economic mismanagement is enough and I encourage Ghanaians to say no to the NDC at the December 7 polls and bring in Nana Addo Dankwa Akufo Addo.”

Nana Akufo Addo will strategically wrap up his first leg campaign tour of the Northern Region in Gonjaland.