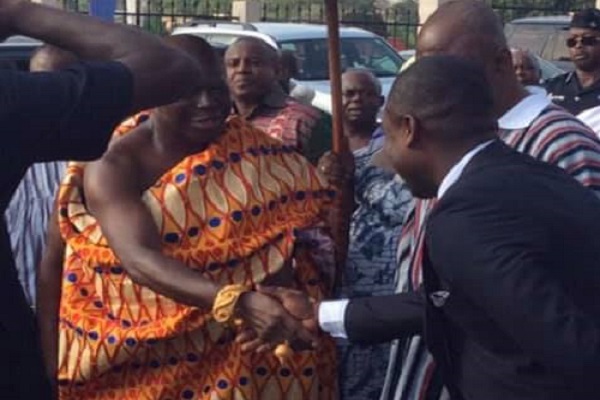 Astute radio late afternoon show host with the Despite Media Group, Gilbert Aggrey, popularly known as Abeiku Santana, has expressed his deepest satisfaction after having a handshake with King of the Ashanti Kingdom, His Royal Majesty - Otumfuo Osei Tutu II.

According to the Okay FM's Ekwanso Dwoodwoo host, the respected Ghanaian king addressed him [Abeiku] as a “great man” when he met with him in the Garden City.

The popular broadcaster revealed in a post on his Facebook page that upon meeting Otumfuo, the king called him and shook hands with him, something he least expected.

To Abeiku, he felt really honoured knowing the Asantenehene does not publicly shake hands with people.

“Otumfour doesn’t shake hands in public but said my son come for a hand shake “you are truly a great man” these were the words of The Asantehene after I successfully organized an event in Kumasi Greatness Recognizes Great People,” The Tourism Ambassador bragged.