Our demonstration will come on – Arise Ghana insists 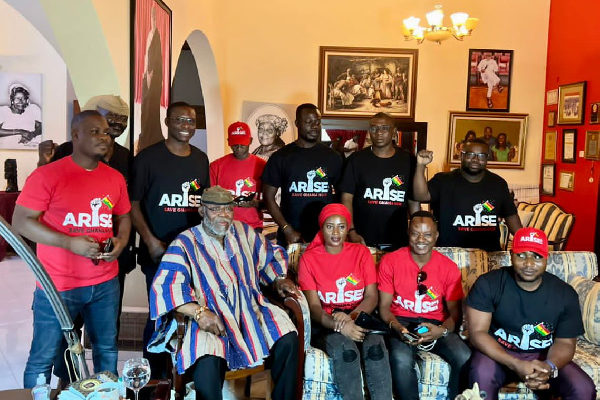 Some organisers with one of the founding members of the NPP, Dr Nyaho Tamakloe

Despite the police's last-minute attempt to obtain an injunction, Arise Ghana leaders have stated that their planned demonstration will take place as scheduled on Tuesday, June 28.

The police in a press statement on June 26 said they have headed to the court for it to determine the time frame for Arise Ghana demonstration after there was some disagreement between the organizer and the police.

The police say that in the interest of public safety and order, they do not want the demonstration to last into the night. The protesters had planned to begin their first day of the march and picketing at 3 pm and end at 10 pm before continuing the next day.

The police, therefore, asked the demonstrators to change the timing, but the organizers insisted they would stick to their time.

The police have however headed to court for a determination of the matter.

In an interview with one of the organizers, Bernard Mornah, he said, “The demonstration is coming on as planned.”

Arise Ghana have planned a historic two-day demonstration primarily to protest persistent and astronomical hikes in fuel prices by the Akufo-Addo/Bawumia government that has imposed excruciating economic hardships on Ghanaians.

In a statement by Sammy Gyamfi, it adds that the protest is to also oppose the imposition of the obnoxious E-Levy on the already-burdened Ghanaian people by the insensitive Akufo-Addo/Bawumia government and demand a full-scale and bi-partisan parliamentary probe into COVID-19 expenditures.

Others are to protest the grabbing of State lands by officials of the Akufo-Addo/Bawumia government, particularly the de-classification of huge portions of the Achimota Forest reserve.

The rest are to protest the increased rate of police brutalities and state-sponsored killings of innocent Ghanaians, as well as the growing culture of human rights abuses under the watch of President Akufo-Addo and Vice President Dr Mahamudu Bawumia, and demand the total cancellation of the fraudulent “Agyapa” deal.

The group planned to start the series of a demonstration on 28th June 2022, starting from the Kwame Nkrumah Circle Interchange/Obra Spot and ending at the frontage of the seat of government.