Over 200 UN staff in Syria diagnosed with coronavirus: Live news 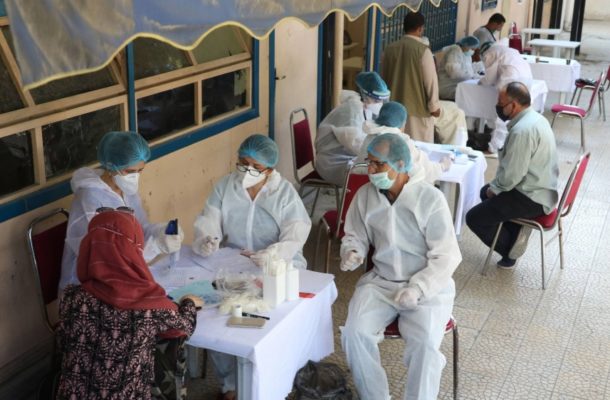 More than 200 United Nations staff members have been diagnosed with COVID-19 in Syria, according to a leaked UN document, as the international organisation steps up efforts to contain the spread of the disease in the war-torn country.

COVID-19 cases are rising in 22 of the 50 states in the United States, according to a Reuters analysis, as the country celebrates its end-of-summer Labor Day weekend.

The Australian state of Victoria has reported 41 new cases and nine new deaths from the coronavirus, a day after extending a strict lockdown in Melbourne.

Nearly 27 million people around the world have been diagnosed with the coronavirus, and more than 881,000 have died, according to Johns Hopkins University. More than 18 million people have recovered.

Here are the latest updates:
Monday, September 7
01:10 GMT - Brazil reports 14,521 coronavirus cases, 447 deaths
Brazil's Health Ministry has reported at least 14,521 additional coronavirus infections and 447 deaths, raising the total number of cases to at least 4.14 million and death toll to over 126,600.
Brazil ranks second in the number of cases and deaths, but also ranks highest in the number of recoveries at more than 3.5 million.
In terms of the number of cases, however, Latin America's most populous country could soon be overtaken by India, which reported 4.11 million infections as of Sunday.
00:35 GMT - Over a million Hong Kong residents sign up for COVID-19 testing

The Hong Kong government said that as of Sunday night, at least 675,000 samples have been collected since the testing was launched on September 1 [Anthony Kwan /Pool via EPA]

An estimated 1.13 million residents of Hong Kong have signed up for free coronavirus testing in the semi-autonomous Chinese city.
The number represents about 15 percent of the city's 7.5 million residents.
In a statement, the Hong Kong government also said that as of Sunday night, at least 675,000 samples have been collected since the testing was launched on September 1.
An additional 180,000 people signed up on Sunday for the week-long programme, the statement said, urging more residents to participate in the free service extended by the government.
More than 4,800 people have tested positive of COVID-19 in Hong Kong, and at least 94 have died. More than 4,500 patients have already recovered.
Pro-democracy activists have called for boycott of the programme citing privacy concerns after medical staff from mainland China helped in carrying out the testing.
00:10 GMT - Australia's Victoria state reports 41 new COVID-19 cases, nine deaths
Victoria state in Australia has reported 41 new cases and nine new deaths from the coronavirus.
The number of cases in Victoria is slightly lower than the previous day's 63 infections, but the fatalities increased almost twice from Sunday's five cases.
On Sunday, the state premier ordered an extension of a "hard lockdown" in Melbourne, Victoria's capital and Australia's second-largest city, until September 28 to help contain the spread of the disease.
Australia's second-most-populous state accounts for most of the cases and deaths in the country. The country has reported some 26,200 cases, and more than 760 deaths.
00:05 GMT - Over 200 UN staff in Syria have coronavirus
A United Nations official has said that more than 200 of its staff in Syria have contracted coronavirus.
In a letter leaked to Reuters news agency, Imran Riza, UN Resident Coordinator and Humanitarian Coordinator in Syria, informed UN heads of agencies that the international organisation is trying to secure a medical facility to treat the patients.
"More than 200 cases have been reported among UN staff members, some of whom have been hospitalised and three who were medically evacuated," Riza was quoted as saying.
The news comes as Syria is reportedly experiencing a tenfold increase in cases in the country in the last two months.
According to Johns Hopkins University, Syria has over 3,100 cases and 134 deaths.
00:01 GMT - COVID-19 cases up in 22 US states
COVID-19 cases in at least 22 states in the United States are rising, according to a Reuters analysis.
The US is celebrating the Labor Day holiday; a long weekend where families and friends get together to mark the end of summer.
As recently as three weeks ago, cases were increasing in only three states, Hawaii, Illinois and South Dakota, according to the Reuters analysis, comparing cases for the two-week period of August 8-22 with the past two weeks.
Most of the 22 states where cases are now rising are in the less-populated parts of the Midwest and South.
_______________________________________________________________
Read all the developments from yesterday (September 6) here. Source: aljazeera.com