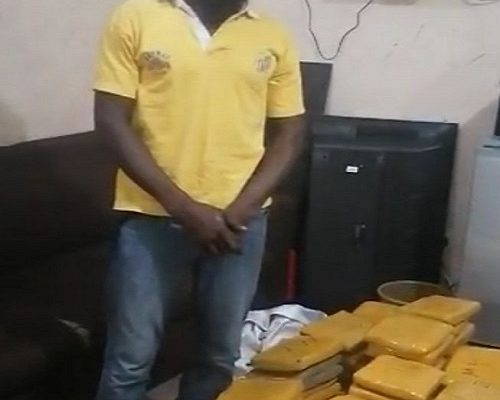 The Accra Regional Police Command has arrested a suspect by the name of Haruna Iddirsu aged 36 years who is a painter and a gardener by profession for processing Narcotic Drugs without lawful authority.

On 23th of November 2021, the Regional Police gathered that a drug transporting syndicate who had been on the police wanted list, had managed to transport into Accra some substances suspected to be Indian hemp and had hidden the substances at a secret location.

Addressing the media at a press conference in Accra, the Director of Operations for Greater Accra Region, ACP Kwadwo Asante who spoke on behalf of the Accra Regional Police command indicated that, the surveillance was immediately mounted on their movements, and suspect Haruna iddrisu was identified as the main distributor.

He said the Police trailed suspect Haruna Iddrisu and succeeded in arresting him at his hideout in Gbetsile, near Ashaiman together with 229 slabs of dried leaves all suspected to be Indian hemp.

He added that investigation into the matter is still ongoing and further updates will be communicated to the general public.