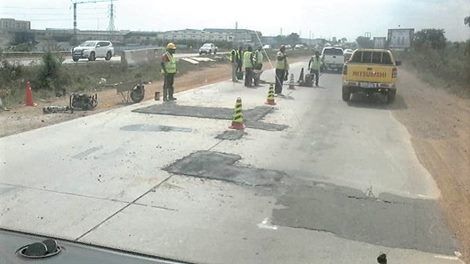 Patching of potholes on the 19-kilometre Tema Motorway has commenced.

The remedial works, estimated at GH¢2.4 million, involve the patching of potholes with bitumen materials in the inner carriage of the highway.

When this reporter used the road yesterday afternoon, workers of the construction firm carrying out the works, Sesecom Limited, were spotted using bitumen to seal potholes on parts of the concrete overlay near the Community 18 section of the road.

One of the construction workers the Daily Graphic spoke to said the works started about 10 a.m.

It was also observed that the patching of the road had resulted in a traffic jam that stretched over four kilometres on the Accra-bound section of the motorway.

Motorists using that section had a tough time making the journey.

They, as well as passengers, asked why the patching was being done during rush hours, as the situation caused much inconvenience to them.

Some commuters blamed those who awarded the contract for selecting the busiest hours of the day for the patching works to be carried out.

A driver, who gave his name as John Antwi, said such works ought to have been done at night and on weekends to avoid creating discomfort for commuters.

It was learnt, however, that to help prevent traffic jams during the patching works, the contractor had been asked to work after 10 a.m. each day; that is, after the morning rush hours.

When the Daily Graphic arrived at the site near the bridge close to the Abattoir section of the motorway, there was no police presence to manage the traffic situation.

However, the contractor had mounted road signs at vantage points to direct traffic, while some of the workers served as traffic wardens to control the situation.

The Accra-Tema Motorway is the busiest highway in Ghana and one of the important roads in the West African sub-region.

Records show that about 35,000 cars pay tolls daily to use the route and that generates about GHc40,000 daily or GHc14.6 million annually.

The motorway forms an integral part of the Trans-Africa Highway stretching from Lagos through Lomé, Accra and Abidjan to Dakar.

Today, the 19-kilometre highway is riddled with potholes on both sides, a condition that causes discomfort and frustration to its users.

In addition to that, iron rods that were used to fortify the concrete surface are exposed at some sections due to the deterioration of the road.

The government has, meanwhile, stated that major rehabilitation works on the motorway are scheduled to commence in the first quarter of 2019 and will involve the expansion of the carriageways and the provision of interchanges to ease travel time on the road.