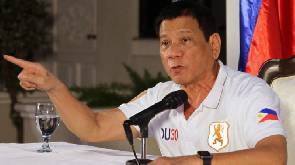 Philippine President Rodrigo Duterte allegedly once shot dead a justice department agent with an Uzi submachine gun while serving as mayor of Davao.

The allegation was made by Edgar Matobato, a self-confessed former death squad member, before a Senate inquiry on extra-judicial killings.

Mr Duterte, he alleged, ordered him and others to kill about 1,000 criminals or political rivals over a 25-year period.

A spokesman for Mr Duterte denied the allegations.

Mr Matobato, 57, said he had been a member of the Davao Death Squad, a notorious vigilante group allegedly responsible for hundreds of killings.

"Our job was to kill criminals like drug pushers, rapists, snatchers," he said.

But he also said that Mr Duterte's opponents had been targeted too, including four bodyguards of a local rival for mayor, Prospero Nograles.

In 1993, he said his group had injured a justice department agent after a confrontation at a road block.

"Mayor Duterte was the one who finished him off," he said.

"Jamisola [the justice department official] was still alive when he [Duterte] arrived. He emptied two Uzi magazines on him."

Victims would be shot or strangled, he said, with some disembowelled and dumped into the sea so fish could eat them, or in one case fed to a crocodile.

He told the Senate panel he had gone from a witness protection programme into hiding when Mr Duterte became president, fearing for his life.

Mr Matobato also alleged Mr Duterte had ordered the bombing of a mosque in retaliation for an attack on Davao Cathedral in 1993.

On this claim, Mr Duterte's spokesman, Martin Andanar, said "I don't think he is capable of giving those orders."

He said the country's Commission on Human Rights had failed to even prove the existence of the Davao Death Squad.

"I don't know what this guy is talking about," he wrote on Facebook.

"I can only suspect that this guy is being manipulated by some people to only serve their own selfish interests."

The woman leading the Senate inquiry into extra-judicial killings, Leila de Lima, is a strong critic of Mr Duterte and has been accused by him of having links to the illegal drug trade, something she denies.

At one point, she and an ally of Mr Duterte, Senator Alan Peter Cayetano, clashed, with Mr Cayetano questioning Mr Matobato's credibility and accusing him of being part of a plot to unseat the Philippines' president.

Mr Duterte became mayor of Davao in 1988, and his tough stance saw crime rates plummet, an approach he has vowed to replicate at national level.

Since his election this year more than 3,000 drug users and dealers have been killed amid international alarm over human rights violations.

But Mr Duterte has dismissed concerns over his drugs policies, calling UN Secretary General Ban Ki-moon "a fool" and referring to US President Barack Obama as a "son of a whore", something he later said he regretted.