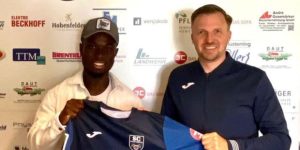 He was born in Dortmund to Ghanaian parents but was trained as a junior at VfL Bochum.

The 22-year-old winger has signed a one-year contract with coach Daniel Brinkmann's team, including the option for another season.

Boakye played for VfL Bochum in his youth and then moved to Wuppertal via SG Wattenscheid 09 and Rot Weiss Ahlen.

Born in Dortmund, he made 29 appearances for WSV last season (seven of them in the starting XI), scored five goals and provided three assists.

"With Philip we have gained a talented young player who often came off the bench in Wuppertal," said Wiedenbrück coach Daniel Brinkmann. "He dribbles well, is lightning fast and his five goals this season show how dangerous he is. We hope that with more playing time with us he will take the next step in his development."