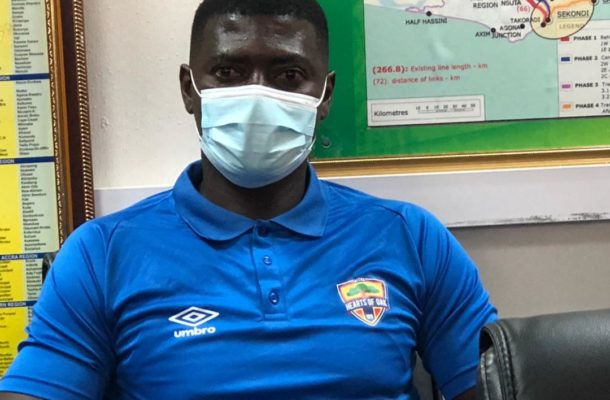 The promising young gaffer resigned unceremoniously from his role as coach of the mauve and yellows last week citing personal reasons.

Barely a week after leaving the Tarkwa based club, Boadu has now signed a three year deal with Accra Hearts of Oak who are without a coach following the resignation of Serbian trainer Kosta Papic.

He was present at the Accra Sports Stadium on Sunday when Hearts of Oak faced fierce rivals Asante Kotoko in the 0-0 drawn game.

Hearts of Oak presently have a skeletal technical department as all positions are vacant after Head Coach Kosta Papic, Assistant Asare Bediako and Goalkeepers coach Ben Owu resigned from their posts.

Boadu is expected to assemble his own technical team with the appointment of his assistant coaches and goalkeepers trainer.

His appointment makes it three the number of coaches to have worked for the Phobians in the first round of the league.

He had earlier led Medeama to defeat Accra Hearts of Oak at Tarkwa in their match day 12 clash, a result believed to have contributed to the troubles between coach Papic and the top hierarchy of the Rainbow Club.

His first task will be against WAFA in the match-day 17 clash of the 2020/21 Premier League.